A Scots Egotist Joins A Team And Tones It Down

A Scots egotist joins a team and tones it down

DURING his tour here in 1977, critics could find few faults in the performances of Scottish singer-songwriter-guitarist John Martyn. 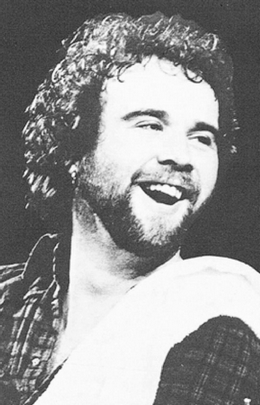 As an individual however, Martyn, an only child of Glasgow parents, and sporting a grossly inflated artistic ego, ruffled as many people behind the scene as he pleased in his large and faithful following. Today, almost six years later, John Martyn, 33, seems to have mellowed - almost to the point of being humble.

Speaking from his small home just outside Glasgow last week, John Martyn was pleasant, effervescent, diplomatic and even complimentary - a far cry from the musical buccaneer who, six years ago, wiped his beer-drenched hands on the red velvet curtains at Sydney's State Theatre, yelled derogatory remarks about his promoter across crowded concert halls, and treated his support artists with complete rudeness.

Even the mild-mannered English singer-songwriter-guitarist Bert Jansch, who was touring on the same bill, could take no more and threw a hefty right hook which sent Martyn to the ground with a large lump over his left eye, and left Jansch with two broken knuckles.

But just as Johns behaviour has changed over the years, so, too, has his stage act and approach to music.

As a soloist, John created a sound of a full band by running his acoustic guitar through several electronic echo and rhythm machines. Today he's working with a band.

"I decided to have a permanent band because I was bored," John said. "I did the solo thing for nine years and it seemed like a good time to change. I learned a lot more and it was very good for my discipline, frankly, to learn how to work with other people. That was something I hadn't done before, it's as simple as that - green fields and pastures new. At first, it was very, very difficult simply because when you're solo you can make your own time. If you play a 12-bar blues nobody cares if you put in 11 or 13. But with a band you have to change on the beat in the bar. Everybody has to know or else somebody looks stupid – and it's normally me. I had to discipline my playing and attitude at lot."

John Martyn and his band supported by the Adelaide-based band Redgum, will be in concert tomorrow evening at Her Majesty's Theatre. John, who normally works with a four-piece band, has cut it back to a two-piece for his Australian tour.

Martyn was exuberant over hearing that he was booked into the same hotel as the English folk-rock group, The Pentangle, who are in concert at the Town Hall on Tuesday evening. And about Bert Jansch being at the same hotel, John just laughed and said: "That could be very interesting."

sitenotes:
This story was published in the Sydney Morning Herald of Monday, 24 January 1983.

| Paul Hillery
@bigmuffsite found this but didn't see it on your concert list https://t.co/NurVAf1AVs
10 months 3 weeks ago
END_OF_DOCUMENT_TOKEN_TO_BE_REPLACED