BEVERLEY MARTYN HAS A PINCHED AND BROW-beaten look about her and orders a non-alcoholic drink. She's just published an autobiography, Sweet Honesty, her life with the cantankerous troubadour she met in 1969, performed and recorded with and, eventually, married and divorced. He died in 2009. 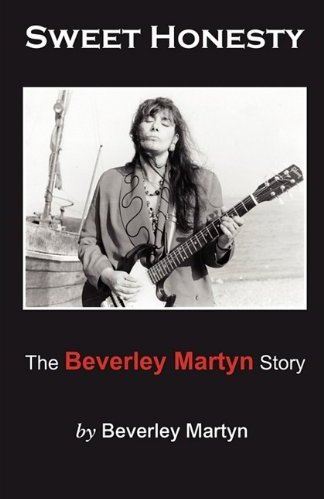 I ask her to sum up that life and she uses the same adjective ten times. "There were some very very very very very very very very very VERY bad times," she says distractedly, staring out at the seafront. "But I have forgiven him."
Why have you forgiven him?
"Because otherwise you get embittered. It was killing me. You're going mad because no one believes you."
Would you have published this book if he was still alive?
"It was finished when he was alive and I was just getting up the bottle to put it out. People were saying, 'Do you understand there's going to be something of a backlash from the John Martyn court?' And then he got the OBE. I wonder if he'd still have been offered it if people knew what he was really like as a human being."

Sweet Honesty is a miserable tale. Popular legend presents her late husband as a rambunctious, fun-loving drinker and gloriously doomed romantic, his angelic curls in a halo of backlighting, his highly charged ballads set in shimmering dope-woven settings full of mystic reverb. When she met him, producer Joe Boyd tried to warn her off - "He's a bad scene, McGeachy" was his only comment, a pointed use of his real name, advice she blindly chose to ignore. John Martyn and Beverley Kutner began a love affair and a career as a duo, releasing Stormbringer and The Road To Ruin. She'd been Bert Jansch's girlfriend and went out with Paul Simon when he toured the UK (both "delightful"), but felt a strong sense of security with this thuggish Scotsman, especially in a music industry where "men were always trying to get into your knickers".

The night they met Bob Dylan was the night it began to unravel. Incensed with rage and jealousy that Dylan had shown any interest in her, Martyn dragged Beverley home and let loose a blizzard of violence, breaking furniture and smashing plates, a fork narrowly missing her eye. "If I'd known what was in store for me, I'd have run screaming into the night," she told me, "and never looked back."

"People think
fame is
contagious,
that if they get
close to that
flame, that
warmth, some
of that talent
will rub off
on them"

In store were some of the following: a record deal he conned her into signing that allowed her no royalties, the cynical destruction of her confidence as a musician, his mental deterioration through drink and drug abuse and ten long years of physical violence. And no chance of a subsequent career as "no agent would touch me in case John came along."

"He stripped me of any kind of strength, told me I couldn't even tune a guitar. Once they get the record deal, you're no use to them any more. He didn't want me around the music, terrified I would upstage him. They want you to look after the children but keep the children out of sight. I was drained of all my personality. He said he'd kill me if I tried to leave and kill any man that tried to take me away. I was sick, a battered wife, with no sense of strength. He's up there and everyone loves him and I'm just this little woman who has to put up with this stuff. I had to get away. I ran to the police for protection, as you do when it gets so bad you feel you're not going to live, you'll be knocked down one day and never wake up."

"In the end I think he just lost his soul," she said. "All the drinking, the eating, the buying stuff and squirreling it away. He would never buy one bar of chocolate, he would buy 30. Just greed. Trying to fill up the emptiness when you've got nothing inside. When you can't taste any more. When you can't feel any more. It's like everything's gone dead. Wickedness. Total self-interest. A desire to be cruel."

I paid the bill and she walked me back up to the station. "Linda Thompson got treated rather badly too," she said quietly, "but then she married well the second time. Unfortunately, I didn't manage to scramble back up again."

I asked after the two children she had with John Martyn. The daughter having her hair stroked by her apparently adoring father on the back cover of Sunday's Child is now 40 and "was virtually cut out of his will". Their son, 36, is a homeless heroin addict living on the streets of Brighton, she told me, glancing down a side street. We could walk past him at any moment.

Sweet Honesty by Beverley Martyn is published by Grosvenor House.

Caption:
Few rock stars make exemplary parents. His daughter Mhairi, on the back cover of John Martyn's 1975 album, was "virtually cut out of his will", her mother claims.

| Paul Hillery
@bigmuffsite found this but didn't see it on your concert list https://t.co/NurVAf1AVs
10 months 2 weeks ago
END_OF_DOCUMENT_TOKEN_TO_BE_REPLACED