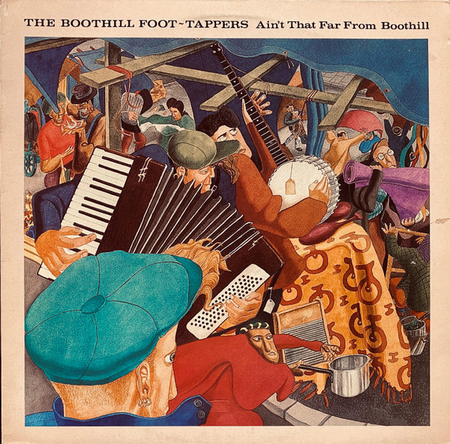 While searching for an old concert in Barnstaple, I stumbled upon a remark by DJ Wendy May: "After extensive touring and some John Peel sessions they eventually signed to Phonogram and made an album in 85, which featured the legendary John Martyn on guitar." She is referring to a band called the Boothill Foot-Tappers. They made exactly one album that surfaced October 1985: Ain't That Far From Boothill. It was released by Mercury (MERH 76) and John is indeed credited for Guitars on a track called Stand Or Fall (side B, track #3).
No idea why this track was never mentioned in the older discographies before. It has been included here in the Collaborations section and I also found a review.

| One World
Heads up | Summer Gathering https://t.co/oNFUjz01Ha
7 months 2 weeks ago

| One World
Decided to change the name of the website.. https://t.co/wScakX3uX5
8 months 1 week ago

| Paul Hillery
@bigmuffsite found this but didn't see it on your concert list https://t.co/NurVAf1AVs
8 months 3 weeks ago
END_OF_DOCUMENT_TOKEN_TO_BE_REPLACED