Player Of The Month 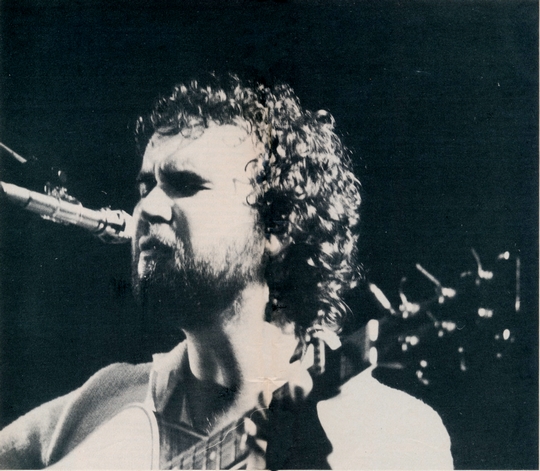 Fans of John Martyn have probably noticed that the genial songster has been a little elusive of late. We decided that it was about time we brought him out into the open and got some straight answers about what he's been up to for the last year. The last (official) album was Sunday's Child, released some two years ago, since which he seems to have retreated into increasing obscurity at his home on the south coast. The combined bullying of a manager1 and a record company can, however, produce remarkable results; John is once more about to unleash himself on the world. So why has the last year been so slack?

"Because I didn't really want to play. I played six gigs in the last year,2 and I'm going to Norway tomorrow, so I'm winding myself up for another period of work. I haven't worked for about a year because I just didn't feel like it at all. I think I'd taken on rather too much. It just seemed to be a bit of a waste of time. I didn't need the money. "

Something which did happen was his decision to record and distribute an album himself from his own home. "That was a lunatic affair. I took some tapes of a live thing that I wanted released to Island, and they said they didn't think the time was right for a live album. I said, Well, can I release it? They said, How would you do that? I said I'd put an advert in the paper, and they can write to me and get their albums. So we did it. Now unfortunately I was working when it finally came out, when it finally got pressed and released to me, so my wife had to do about four weeks' work sending them out. Then I came back, and instead of having three weeks' rest before another tour I had to work on getting this out. So it all got a bit out of hand. I wouldn't do it again. It was crazy. I really got completely snowed in."

Healthy
Island's decision not to release the album was therefore a rather strange one. John sold every one of the 10,000 albums pressed, which even by the standards of a large record company is a healthy sale. So why no action from them?
"I don't know. It was just the idea of having that one album out, but because we'd been playing the tracks so often on stage, Danny (Thompson) and I, the specific tracks had changed a lot from the originals, so it was really worthwhile. And there was so much improvisation that I thought it was really worthwhile putting that out. I'm sure they could have sold it."

During his lay-off Martyn has become increasingly nervous about playing again live, though he has kept up his playing in private. What else was there that kept him off the road? Was it simply overwork? "Basically I got a bit bored with running up and down the motorways, though the gigs were really a lot of fun. Funnily enough, when you're in Northampton you might just as well be in Australia. I'm being quite serious - that's the way I look at it. It has nothing to do with the fans or anything else - it's simply that my attitude to travelling has changed. Quite literally, if I'm in Sydenham I might as well be in Timbuktu, because I'm not at home."

Well, maybe he's more of a family man than a superstar, but in his own quiet way, John Martyn has made some pretty remarkable innovations on the border between folk and jazz. Those who heard his early experiments with a miked-up acoustic guitar will remember how unique it sounded at the time. Based around the Echoplex, the technique involved using the characteristics of multiple echo to fill out the sound to an amazing degree, until it no longer sounded like an acoustic guitar at all, but a strange new instrument. I asked what made him start using electronics in the first place, knowing how conservative most 'folkies' are.

"I had a band and I really wanted to get some sustain behind the vocals. Before that I'd really been playing straight folk music. So I bought a saxophone. But I soon found that it was pretty difficult to play the saxophone and sing at the same time. I decided to change the guitar sound instead, so I went through a long period of playing stuff from Stormbringer on electric guitar at home -amplified acoustic, that is- and the stage thing became the natural extension of that, I bought the echo machine originally for sustain, and then found out that you can chop rhythms in between beats."

Mutron
What else does he use? "A volume wah-wah pedal and a fuzz box, and I've just started using a thing called a Mutron, which I use only at the lower settings, so that it almost sticks another octave on what you play, giving you harmonic undertones. The lowest I can get on it is about a C on the bottom string. It works best on the high notes."

Effectively then, this means using the Echoplex as a kind of percussion instrument. In fact, the reason for using more than the basic acoustic guitar in the first place was to compensate for being a solo player. There are no drums, there's no orchestra... and yet there's a song which is too complicated and too rich for the simple treatment. Martyn therefore began a search for the sound which would give him the deepest bass and also the shrillest treble. The limitations of even an electric guitar were too great to accommodate this need.

"You can't get as good a bass sound off anything that I've used. And I've used very bassy guitars like Gibsons -old Gibsons, new Gibsons, every kind of Gibson- trying to get to the bottom - the real bottom. And you can't get as plummy a sound as you do on an acoustic guitar that's amped up. It's a portable pick-up, the same sort of pick-up as you put on an electric guitar, only with a couple of brackets."

But the sound is very different? "That's right, I think you must get overtones, and it gets the vibrations through the wood, which you wouldn't get on a solid guitar either. And that's what puts the bass there. If anything it's a little bit weak on treble." The pick-up is actually a Di Marzio and the guitar a Martin D28, which, though he has had it over four-and-a-half years, he does not particularly like. "The ideal for me would be just a slightly bigger sound. My wife's got a lovely Guild that I really like, but I can't get used to the neck. If I had the neck I've got on the Martin with that Guild body I'd be really chuffed. It's not a bad guitar, but I've heard better. Maybe I've heard people's guitars recorded better or something, heard them through a good mike. I think even if you found what you considered to be the perfect guitar, you'd eventually hear something that was slightly better in some way."

John's last few albums have been recorded largely with bands, and some of the tracks are so jazz-orientated that it's hard to imagine them otherwise. For the most part he has gigged either on his own, or with Danny Thompson providing a beautifully lyrical string-bass counterpoint. "I've been through a brief band period and I'm thinking of getting into another one. I might get an electric bass player in. At the moment, for a set-up to be perfect, I'd like two bass-players - Danny, an electric bass-player and a drummer." I mentioned that John Stevens had recently used both an electric and an acoustic bassist. He nodded. "That's right. Well, I used to play with him. He's on the live album. Two bass-players is a great idea.3 It's been done often, though: Coleman Hawkins did it, Pharoah Sanders did three albums with two bass-players... but mostly in the jazz idiom. I'd like to get Danny playing long lines."

Martyn's voice is as much an instrument as his guitar. For those who don't know, it has a deep, dramatic range and a raw rather than rough edge. And rather than sing the words straight, he slurs them, so that they slide into one another, and this creates a peculiarly strong emotional feel, perhaps like the singing of a desperate and drunken man, though John is neither drunken nor desperate. The nearest thing to it, in fact, was the voice of the late Tim Buckley. John disclaims ever having listened to Buckley before the similarity was pointed out ("I didn't think he was that good - terrible thing to say, isn't it?"), but was not aware that the development of Buckley's singing style had followed a similar path to his own.

Painful
"That's great. I can definitely identify with that approach, but I'll tell you who I do like. About the greatest singer I've heard for a long time is Leon Thomas. He was incredible - did some records with Pharoah Sanders about four years ago4..."
Despite his respect and admiration for Thomas, he does not regard him as an influence, rather an inspiriation.

Something else that I had noticed about Martyn was his penchant for sad and pain-filled songs, and when I asked him whether he had intended them to be painful, he seemed unsure. "Well you're going to get that, aren't you, if somebody's truthful about their music... I mean, I don't believe everyone is leaping through life having a wonderful time. I think everyone goes up and down... that's interesting, because for a long while I had the opposite reputation - it was all love and peace and smiling. But my mother said the same thing about Inside Out. She said that album was very sad. I didn't conceive it as a painful album at all. But then obviously I sing a lot of sad songs. Maybe I remember sad things better than I remember happy things..."

sitenotes
1 Rob Wynn. Lee Barry wrote about this decision: "In the autumn of 1975 manager Rob Wynn issued a statement announcing John would be taking a year off. John knew nothing of this until the statement was issued, but having chewed it over decided it wasn't such a bad idea. Matters must have been in bad shape for his manager to make such a statement on John's behalf."
2 That estimate is far too low.
3 It would take a long time for that plan to materialize: I think on Back To Marseilles (On The Cobbles).
4 Karma (1969) made a big impression on John and has Leon Thomas singing. And yodeling...
This article was published in Beat Instrumental #124 of February 1977, on page 6 and 7. The main focus of the magazine was on gear and instruments. This issue had Carlos Santana on the cover and cost 35p.

| Into the Trees.
@David_Lofts @bigmuffsite That's really great. You sing that really beautifully - I'm not often taken with other p… https://t.co/3uovZ520tI
1 week 16 hours ago

| Into the Trees.
@David_Lofts @bigmuffsite Fantastic. What a brilliant experience. Do you perform?
1 week 1 day ago

| Into the Trees.
@David_Lofts @bigmuffsite You lucky lucky man. Where did you get to do that and are you doing it again?
1 week 1 day ago
END_OF_DOCUMENT_TOKEN_TO_BE_REPLACED