"Published by Intersong Music Limited. Order reference 7688. Distributed by International Music Publications."
The 32 page booklet contains 13 songs, a biography by Steve Sutherland and several pictures from the Well Kept Secret period.
The biography is almost identical to the Well Kept Secret tour program by the same author; only the last paragraphs differ. 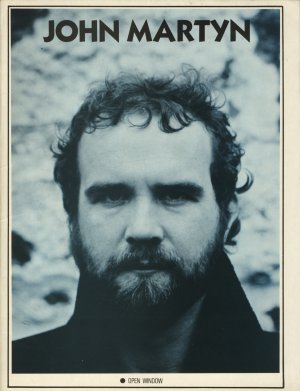 The songs are published in a traditional way, with chords above and lyrics below the notebars.
Each song also got a personal comment by John:

Book design by Bill Smith.
Original price was £ 2.95. Picture on the cover is the same as the one used for the BBC Live video tape.

Example
The songs are taken down in traditional music style. By consequence they only approach John's originals. As we all know John used non-standard tunings. Here's a sample of what it looks like.

Through changing times and trends, through 'love 'n' peace' to political clampdown, from youthful romance to confused middle age, from child to father, from husband to divorcee, from drunk to sober, from novice to poet, John Martyn has resolutely, honestly inspirationally remained true to himself. Whatever style his work approaches, it's distinctly assimilated into the man. Whatever words he cares to adopt, he invariably invests them with a personal poignancy. Whatever anyone else sees sound sense in undertaking, John Martyn has always, will always follow his heart. World renowned now as an expert technician, innovator and ignorer of fashions in pursuit of true style, John Martyn's movingly autobiographical songs -"Diaries of things that have happened to me and my friends"- have strangely never been collected together on paper for public perusal. In fact, in all honesty, the very idea of somebody else sitting down and strumming through one of John's bitter-sweet songs sounds kind of ironic to me considering the man has always, by example, advocated and encouraged independence, integrity and self-discovery. Still, we all have to start somewhere so what better place to discover the musician's potential for self-expression and communication than through the songs of a man never content to settle for sham and never too clever or conceited to learn. 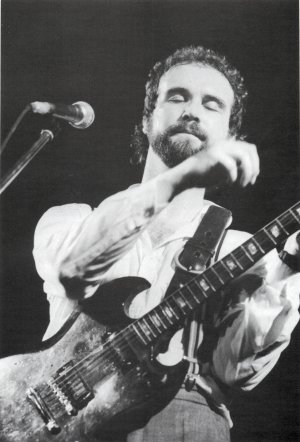 My main concern in this brief assessment is to furnish words and notes bared for your scrutiny yet implausibly separated from his own crucial interpretation with some sort of useful background. The man and his work are so essentially inseparable that in the absence of the author's distinctive voice and exquisitely expressive instrumental treatments, a few biographical details are paltry but essential compensation for the recorded stimulation of songs as important to Martyn as his food, sex, and sleep. So, having thrown in the proverbial towel... here goes:

John Martyn was born in Glasgow in 1949, the only child of two soon-divorced singers. He first fell under the influence of his mother's love of Debussy at an early age and, later, was welcomed under the formative wing of the infamous Scots folkie Hamish Imlach who introduced him to the local folk scene. At seventeen he was playing solo, exhausting neighbourhood opportunities and planning an essential move south.

On arrival in London he was signed to Chris Blackwell's Island label as the first white artist on his budding reggae roster1 and LONDON CONVERSATION was released in February 19682. A promising, basically acoustic work, it featured John's own distinctive rendition of Dylan's Don't Think Twice and that well-worn trad floor spot Cocaine. Acclaimed as it was for its interpretive flair, it was THE TUMBLER, released in December that year that really let the cat out of his bag.

With a healthy disdain for strict folk conventions, THE TUMBLER featured guest jazz flautist and saxophonist Harold McNair to add hints of further dimension to Martyn's growing perceptions and then, in '69, Martyn really let loose, meeting and marrying Coventry singer Beverley and honeymooning in America. The relationship -which was to have a lasting and changing effect on Martyn's musical vision- blossomed into STORMBRINGER, recorded at Woodstock and released in February 1970 with, among others, the Band's Levon Helm and the Mothers' Billy Mundi providing experienced support. Indeed, Martyn has credited the Band's Music From Big Pink as his biggest incentive to experiment with electric guitar and pursue his own relentless search for an individual and distinctive sound.

ROAD TO RUIN, released in November 1970, was another collaboration between husband and wife and heralded the duo's real break into jazz, confounding their critics by inviting Dudu Pukwana, Chris MacGregor, Ray Warleigh and Pentangle's brilliant bassist and Martyn's subsequent long-time side-kick and sparring partner Danny Thompson to 'blow along'. Wesley, the first of the Martyn offspring effectively put an end to Beverley's playing and performing career and added a strain of responsibility and tenderness to John's songwriting which surfaced on BLESS THE WEATHER and is still manifest today. Released in November 1971, it's now generally accepted as Martyn's first true masterpiece; the well of inspiration from which all his subsequent albums spring. The light-hearted version of Singing In The Rain pre-empts the volatile showman whose cheeky cockney impersonations, quick wit and razor sharp repartee have entranced and enraged audiences ever since. The title track marks the debut of his relaxed bluesy simplicity due to permeate his future work, discarding the flash rock effects of the time and it's head-swelling exhibitionism for the jazzer's pure search for true expression. Or, as one critic so acutely put it, "One right note says more than a fretful of wrongs."

Head And Heart exhibited Martyn's life-long pacifism and naive belief in the power of love to overcome hardship despite his own admitted lapses into bevvied violence. Martyn's own spot-on self-assessment, that his music had (has?) the rare quality to move both the head and the heart was matched by his boundless experimentation, using his voice as an expressive instrument much like a sax, complimented by Richard Thompson's masterful electric guitar.

The follow-up SOLID AIR is probably Martyn's most popular album. Released in February '73, it's sheer depth and breadth of adventure make it one of the indisputably great albums of it's own, or any other, era. The title track, composed in grief over the tragic death of close friend and fellow Island recording artist Nick Drake is typical of the Martyn to come. The slurred vocals, the loose but lush instrumentation, the lyrics both explicit yet ambivalent all react to evoke the unmistakable atmosphere of a man in puzzled awe and despair of his life yet so in love with his music.

INSIDE OUT, released eight months later, is much free-er; a series of spontaneous -if anything, jazz- late-night sessions with Traffic's Steve Winwood and Chris Wood, (of course) Danny Thompson and stalwart Stones henchman Bobby Keyes among others. Martyn has referred to these invocations of the spirit of the moment as his favourite personal recordings. 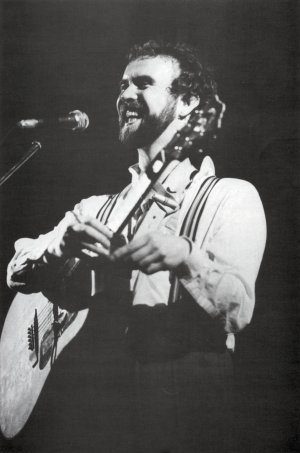 By this time Martyn had toured the States with (oddly enough) Yes and both Free and Traffic, building an appreciative following enhanced over here by an astonishing solo performance on BBC's Old Grey Whistle Test where he demonstrated his agility with the echoplex - a method whereby the guitarist lays down a riff or chord pattern which is taped and played back to be overlaid with more echoed effects. In clumsier hands it was proving further excuse for exhibitionist heavy metal, in Martyn's we discovered a stunning device for the solo ensemble to instantaneously tip the emotional scale from rage to soothing slumber.

After the cosmic foray of INSIDE OUT, SUNDAY'S CHILD came as a relaxing surprise. It's release in January 1975 heralded a return to a smoother, straighter song format with a sentimental tinge, intensely personal, intermittently painful. Martyn now decided a live album was long overdue, Island disagreed and so, prior to an extended hiatus in Jamaica jamming with dub master Lee Perry and the mighty Burning Spear he released LIVE AT LEEDS on mail order from his home address - an error that brought fans flocking to his house in Hastings.

While Island contented themselves with a barely adequate compilation album of his supposedly more accessible work, Martyn remained silent until 1977 when ONE WORLD revealed further exploits into echoplex funk with the notorious Big Muff as well as gentler infiltrations of melody.

Again silence until October 1980 when GRACE AND DANGER emerged, a breathtaking exhumation and exorcism of the breakdown of his marriage with Beverley. Obviously influenced by Weather Report, Martyn risked a rockier sound with Genesis's Phil Collins on drums and John Giblin providing Pastorius-like loping electronic bass. The single, Johnny Too Bad was a misleading reggae tinged shuffle, DANGER is a dark, brooding album apparently shelved for a year because Chris Blackwell found it too openly disturbing to release.

Martyn left Island in 1981 for a better deal with WEA, Beverley finally secured her divorce and John took his first permanent band on the road, recording his most sensual and straightforwardly (a)political album in the Phil Collins-produced GLORIOUS FOOL. Its title track, a sarcastic mock paean to Ronald Reagan, sets an aggressive tone tempered by the pleading Don't You Go and the swaggeringly sexual Perfect Hustler. This is sweaty dance music for a sterile dance era as ever refusing to call somebody else's tune and unflinchingly reflective of the man and his moods be they free and predatorial or lonely and bemused.

I'd tell you something about his next album but Martyn's gone and punctured his lung on a fence or some such nonsense so, as ever, his life is dictating or, in this case, disrupting, his art.

My wife thinks GLORIOUS FOOL is sexist, it sends my cat to sleep, my mate calls it 'his rock album' and turns up his nose and me? I think it's brilliant that twelve years after Melody Maker asked 'Is John Martyn a folk singer or not?', he's still stirring 'em up. But just as it's unfair to treat your own playing or your personal record collection as some sort of comment on an era, so it barely does John Martyn justice to set him up as the scourge of fickle fashion. "For me" he says, "music is an emotional communication and should be used as such." The man and his music stand proudly, often precariously, alone; neither pristine nor perfect nor immune from criticism but more important than all those things, fallibly, unflinchingly human.

John Martyn's songs are uniquely John Martyn's. As a mirror to our emotions, I dare not ask for anything more.

"They finally discovered the true sequence of DNA.
It is in fact, after all these years, the National Dyslectics Association."