A new tradition and a new Trust Fund..

The tribute concert of Saturday 10 September is SOLD OUT. All 450 tickets have been sold last Wednesday so Carrolls Bar are looking at a packed venue and a capacity crowd. If you don't have tickets there is no use coming to Thomastown because no more people are allowed in. A great result for the John Martyn Trust Fund and a great evening coming up! 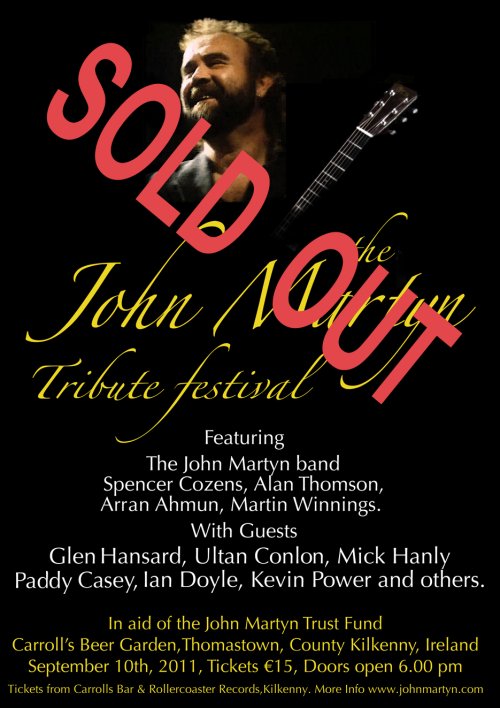 On Sat 10th September there will be a tribute concert in Carrolls Beergarden, Thomastown, to commemorate John Martyns birthday on the 11th, and to raise funds for the foundation which was set up by Johns family, band & friends in 2009. John's band will be joined by many musicians such as Glen Hansard (The Frames, The Swell Season), Ultan Conlon, Ian Doyle (The Man Whom) and more to be confirmed ahead of the night, all for a very special one-off gig. Tickets are on sale from Carroll’s Bar Thomastown and Rollercoaster Music in Kilkenny, priced €15.

The John Martyn Trust Fund has been established to promote, encourage & financially assist new recording artists. The trust will offer recording, rehearsing and promotional facilities to promising young artists who show potential to break through in the music industry.
John Martyn lived in Thomastown for 12 years until his untimely death in 2009. John had a keen interest in new upcoming artists. Musicians young & old continue to draw inspiration from his extensive back catalogue.

Carrolls Bar plans to hold a tribute concert on Sat 10th September 2011 to commemorate John’s birthday which is on the 11th. The initial lineup of musicians is very exciting with Johns full band joined by some of the artists who contributed to Johns tribute album released on August 15th including Glen Hansard, Ultan Conlon & Sabrina Dinan, all of whom are confirmed for this special event.

| Paul Hillery
@bigmuffsite found this but didn't see it on your concert list https://t.co/NurVAf1AVs
10 months 2 weeks ago
END_OF_DOCUMENT_TOKEN_TO_BE_REPLACED