JOHN MARTYN, the tousled Glaswegian whose fizzing, dynamic playing looks like making him the first really new British guitar hero for years, will be treating America to his talents when he flies out for a major tour in October.1

Although he's still quite a cult figure over here, the Americans are always quick to recognise something really new. This will be John's fourth visit2 and it's beginning to look as if he's doing a Jimi Hendrix in reverse. Jimi was largely ignored in the US until he'd made the breakthrough in Britain and John seems to have a bigger following abroad than at home.

In July he'll be in the studios recording the follow-up to Inside Out,3 which was the first of his albums to make a showing in the British charts. But before that he'll be doing a quick European tour, taking in Switzerland, Germany, Holland and Scandinavia in little more than a fortnight.4

Playing on his own or backed by ex-Pentangle bassist Danny Thompson, John Martyn's music is quite different from anything you've heard before. He uses fuzz, wah-wah, reverb and other electronic effects to build up eddying waves of driving sound, so that it seems impossible that there is only one guitarist there on the stage. It would be a great shame if the neglect of British audiences forced him to spend too much time overseas, so if you get the opportunity, show him you care.
Ian Elliott Shircore 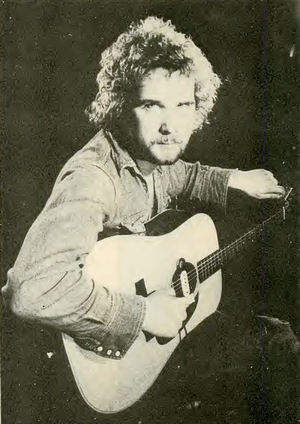 sitenotes:
This short article appeared in Music Scene ('The Compleat Rock Monthly') of June 1974. The magazine saw only 20 issues before it ceased to exist in August of that year. This issue had a Heavy Metal drawing on the cover and originally cost 20p.
1 John did a string of US concerts in October and November 1974, sharing the bill with a variety of artists (John Sebastian, Traffic, Gentle Giant).
2 Starting January 1973 (Traffic and Free), followed by March/ April 1973 (Solid Air tour), December 1973 (Inside Out) and January/ February 1974 (Yes). So actually this was the fifth time John toured the US.
3 Sunday's Child of course.
4 This small European tour remains as yet undiscovered.

| Paul Hillery
@bigmuffsite found this but didn't see it on your concert list https://t.co/NurVAf1AVs
10 months 2 weeks ago
END_OF_DOCUMENT_TOKEN_TO_BE_REPLACED