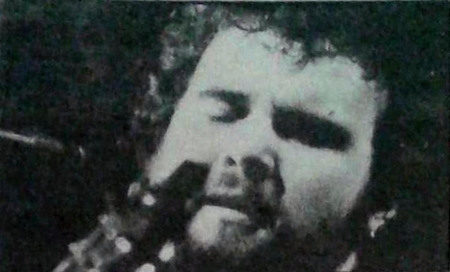 SEAGULLS are soaring on the rising air currents from the sea. Sparrows and yellowhammers are chirruping in the undergrowth. The sun beats down. And John Martyn walks beside the sheer white cliffs at Hastings, where he lives.

He is describing an occasion, when, after twisting his brain with certain brews, he experienced a sudden, uncontrollable urge to play sax at a dangerous and almost-inaccessible spot halfway up the cliffs, where he thought he could achieve a special tone.

"So I'm climbing up the cliff with my alto sax, when Old Bill1 hears about it, and they come along to try to get me down. I'm laughing and crying and trying to explain: 'I'm not gonna kill myself', I keep telling them..."

While perhaps illustrating a personal taste for danger, this story also underlines something about his attitude to sound: that concern for a true quality which makes his live performances, even in non idyllic circumstances, exceptional for their musical presence and clarity.

With Danny Thompson, the doyen of double bass session players, and sometime Pentangler, together with John Stevens, who has also been through the British jazz scene, notably with the avante??-garde Spontaneous Music Ensemble, Martyn creates onstage a fully-rounded musical ambience which, like his cliff-hanging escapade, is both exciting and natural.

Bred in Glasgow, though his Cockney accent belies it, he took up the guitar only in his later years at school. "I tried to play the violin before that," he says. "But it was the same night as rugby practice, so it went down the pan."

He didn't have any musical training as such. "I wish I had, actually. There are a lot of things Danny and John Stevens can sling at each other, where I can anticipate the lines, but I can't really get there. They're going 'A Flat, B Flat...', through a chord order, and I don't know where the hell they're at."

He takes a realistically sceptical attitude to laborious daily practice. "I suppose you'd be a better player if you did, but it would mess me up emotionally to have to do that. It would be the wrong attitude. I'm proud of being a musician as a profession, but I don't lose sleep at night because I don't practice."

"I don't think there's any point in imposing too much discipline on yourself as far as that's concerned. The only way it's going to come back at you, is if you don't do it, you're sometimes going to feel frustrated. But it's a natural thing: if you want to play, you're gonna play, if you don't, you aren't. It's as simple as that."

Martyn recorded his first album, London Conversation, in 1967, when he was 18. On it, and three subsequent albums, he can be heard imitating and mastering the prevalent acoustic guitar styles, in the wake of Davey Graham and Bert Jansch2. But it was on his Solid Air album that he really showed his apprenticeship was over. Here his experiments with tape echo loops and modulations of the natural tone of the acoustic guitar came into their own, and paved the way for Inside Out and the current Sunday's Child.

Inspired to experiment with electronics by Terry Riley's A Rainbow In Curved Air, he now uses a string of electronic gadgets linked up with his four year old Martin D28 guitar (which cost £435 at the time).

Many a folkie -one thinks of Dylan and Roy Harper- is a frustrated rock and roll star, and has given up the acoustic to a large degree. Though Martyn admittedly leans more to the jazz end of the spectrum than these two, why has he stuck to the acoustic? "Quite simply, the acoustic is too good a sound to lose. It's developed over 2,000 years, it looks simple and everyone's got one. But there's a lot more to it than meets the eye: they've gone through a lot of changes before they ended up like this. And there's something about the natural shape of the instrument: there's a direct relationship between that and the sound it produces which is really weird."

Martyn's preoccupation with the natural approach to music, rather than the abstract and rational, extends to his attitude to music theory: "I don't know anything about that side of things, really," he admits. "Though funnily enough, I did a gig with Mingus years ago, and I was messing about on the guitar in the next dressing room when in comes the horn player. He said something like 'that's a Phrygian mode with a Mixolydian root'."

"I respected that at the time, and it was very funny, but I don't think it's particularly important to understand all that. I think it can be a mess-up as much as anything else. I know a lot of guitar players who are technically ridiculous, and can sort out that this is a E minor 19th, with an F 53rd on top... yet I wouldn't take the time of day to go and hear them."

"Playing with Danny Thompson and John Stevens has been an inspiration to me. Danny is a perfect combination of technical ability and being natural. And John Stevens is a totally unselfconscious guy, he wouldn't mind if 18 children came on and started bombarding him with cream buns!"

Meanwhile, Martyn experiments with a Gibson electric at home between touring and recording. "Well, it's something to do isn't it? It makes a change from beating up the missus3. I suppose I just like making a noise." – EDWARD JONES

sitenotes:
1 Slang for the police.
2 Jones does not do quite justice to the Stormbringer! and The Road To Ruin albums here. Same goes for Bless The Weather.
3 This quote was cited in the seventies and eighties as being humourous but in hindsight it also sounds somewhat uncomfortable.

| Paul Hillery
@bigmuffsite found this but didn't see it on your concert list https://t.co/NurVAf1AVs
10 months 2 weeks ago
END_OF_DOCUMENT_TOKEN_TO_BE_REPLACED