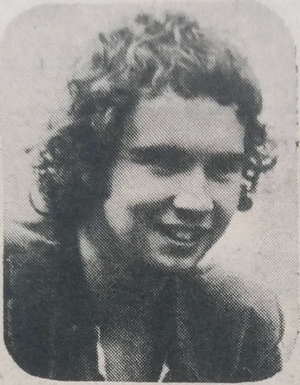 John Martyn will talk about anything without the slightest provocation, except his music. He's suspicious of words.

He says that they're apt to smother meaning. So he leaves the music to speak for itself and indicates that this interview should really be about the changes needed to make this world a better place to live in. John is very into 'love' these days.

The quantity of rock and singer/ songwriter music that dwells on hate, blame and violence has produced a reaction in him as forceful and spirited in its way as agro-rock is towards the other extreme. Love sounds like a very simple and naive solution to nothing, but that, he says, is because people have lost their faith and conviction. People have been fooled into thinking that anything that sounds that simple can't be right.

His attitude is epitomised in a track called Head And Heart off his last album Bless The Weather. It's a true anti-blues, beginning: 'There's just no way to say how much I love you, You never made me cry, an' that's just fine.'

Head and heart represent the balance between mental and emotional, reason and feeling. This tight harmony is essential to Martyn's music. While the vast majority of singer/ songwriter/ guitarists are lyricists with a necessary accompaniment, Martyn's balance of words and music is almost unique. He uses the textures created by the acoustic guitar like nobody else. Lyrics complement the moods he chooses to create [on] the strings. He refuses to allow words to dictate his songs, and avoids depth analysis of current affairs.

"I would much rather listen to practical suggestions than academic documentation. That's on a lyrical basis. Notes can never be that precise. They can just be a feeling. I find words are so untrustworthy. I'm trying to simplify all the lyrics and get down to a musical expression."

John Martyn is in the precarious position of being re-discovered by a lot of people who never really turned on to him the first time round. In fact the motivation behind his acoustic and electric playing is exactly the same. Experimental with the texture of sound is predominant in both, it is merely that the emphasis is different.

Contrary to John's own wishes, his introduction of an electric number or two into his set has tended to polarise his audiences into 'electric' listeners and 'acoustic' listeners. He's hoping that in time everyone will come to appreciate both styles.

His electric pieces take up about half of his live set, but when it [comes] to records this side of his repertoire has been frustratingly under represented. He didn't really develop it until after Stormbringer, the first LP he made with his wife Beverley – Band inspired and including Levon Helm of The Band playing drums.

Later he added pick-up and amplifier to his acoustic guitar and proceeded to turn folk clubs into some of the freakiest, echoing sound chambers imaginable. It seemed a reasonable assumption that he'd put some of his new sound down on record1. But although John and Beverley's The Road To Ruin and John's Bless The Weather included some beautiful use of guitar they were -in this respect- very much more orthodox than his live performances2.

A new solo album will shortly be released3, and like its predecessors it ignores the reverb. Nonetheless what has been recorded is incredible, stressing texture and control in the instruments and John's vocals but with the emphasis on acoustic music.

Despite Martyn's satisfaction with the acoustic sessions he did for the album, he is still searching for the right musicians to back his electric style. Until he finds them he won't record the reverb. At the moment he's thinking in terms of a Latin American rhythm section4.

"The alternative would be for me to do the thing solo and I don't feel like doing that now. I just have to feel a lot more efficient with the techniques of electric guitar. I really think that the kind of guitar I'm playing at the moment is not suitable for British musicians. It's a terribly conceited thing to say. But I really feel that I'll find the musicians somewhere5."

"It’s technique I need with the electric guitar. It isn't heart. I've got all the heart I need. Apart from all the other things I feel really efficient when I play acoustic guitar, I find that when I play electric guitar I still have to think about what I'm playing."

John detested living in London so much that he moved out to Hastings with Beverley and their two children, and is now happily involved in rustic life. He's dedicated to music, but if it ever came to a decision between selling his soul and getting out of the business he says he'd have no qualms about making a living some other way.

"Most people go into their music with the attitude of I must be a success. That's the business angle. I think if I didn't have a woman that I really love and had something that I think is worth having I think I would go over to America on an experience basis. But as it is I'm a bit scared of being apart from people I really dig. Sure, I know it's going to be good for my career, and that more people will see me. 6"

"The rest of my life is going to happen naturally I've decided. There are so many little things that I've been pushed into, and I intend to do things my way. At the moment my head is racing musically much faster than it ever has before. I think America will be a bit too fast and furious to produce much except ideas. In terms of demo tapes there won't be much coming out, but in terms of ideas…" – ANDREW MEANS.

sitenotes:
1 This led to the release of Inside Out, the 'carte blanche' album.
2 Which must have been one of the reasons Live At Leeds was recorded.
3 Solid Air, still being rather acoustic.
4 Interesting to see that John has been preparing One World for so long.
5 Like in Jamaica.
6 December 1973 John embarked on a couple of US tours supporting stadium-filling acts.

Photograph of the article kindly provided by John Neil Munro. A few typing errors have been corrected.