ACCORDING to the official biog, John Marlyn was born in New Malden, Surrey, but was brought up for the first 15 years of his life in Scotland after his parents split, coming down for occasional visits to his mother in the stockbroker belt. Now he seems to be back in Scotland for good, himself split from his first wife and seemingly all set to settle down with his new lady, Gillian,1 the mother of his forthcoming infant. 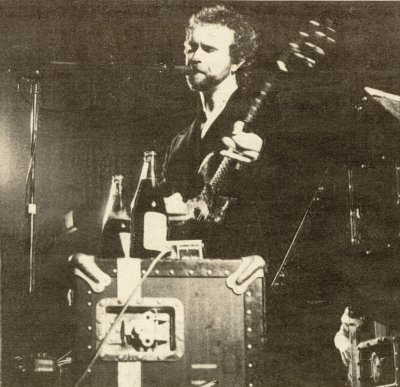 Add to this the fact that his new album, which has charted, ironically enough, after he persuaded Island to release it against their better judgement,2 has finally resolved his musical identity as a would-be rock 'n' roller, and there was one question fairly crying out to be asked.
Have you, I asked somewhat diffidently, found your identity by moving to Scotland?
"No," he said shortly, and then laughed. "I couldn't be said to have found my identity in Scotland or anywhere else, really."

Was that because he had never really lost it?
"I don't think it's ever been lost, no, in as much as I've remained very much the same. I've gone through some weird and peculiar periods, I think I got a bit carried away for a while, but I think I'm far more stable now than I was over the last few years. It's a bit like the way people kept telling me I wasn't having a happy childhood. I remember I was never expected to have one for some reason but I don't remember being especially unhappy. This isn't where I was brought up. I was brought up in a proper old grey tenement which I'll show you on the way by if you want to.3 It's very nice, very..." he slipped into a refeened Scots, "very naice, very old and grey and ramshackle, very dirty, you know."

With John Martyn, a conversation tends to be conducted on several levels, especially if you are one of his pet hates, music writers. This multilayered conversation can be observed through behaviour on stage, the looning about, the dropping into funny voices, the fiddling with the Copycat, a barrage of verbal prestidigitation which appears designed not so much to be an attempt to obscure the real John Martyn -whoever that may be- but to present the varous and sometimes contradictory facets of his personality simultaneously, as if he is speaking in chords rather than individual musical notes.

It can be as exhausting as reading James Joyce's Finnegan's Wake, but OK, let's talk about self-analysis. Why?
"I suppose I really wanted to make sure of the reasons for my divorce and that kind of stuff. It was a real painful thing for me. I really regret it and hated it. I kind of examined exactly why we should have got to that state and all that kind of business. You find the best way to do that is to examine yourself. Once having examined myself I find it so fascinating I've never been able to tear myself away."

He laughed. Then: "I'm actually very happy, very happy, surprisingly happy."
This isn't the first time he has toured with a rock band, of course. There was the famous tour with Paul Kossoff and John Stevens and Danny Thompson, which nearly put him off bands for good.
"I can't think of a worse bunch of lunatics to hit the road with, and that kind of put me off. Also being young and inexperienced about the business aspect and about the way other people ran their gigs. I mean, it has to do with going from folk clubs to rock 'n' roll gigs. Had I been brought up in the same way that Geoffrey (Allen, his drummer) had been, going in and watching the mechanics of a band, knowing how people got paid, how you organise a tour, how you put a show together, I'd have been OK. I didn't have any of that because I just went from carrying the guitar into the gig and doing it all myself, to all of a sudden having other people to do it for me. I really never knew why they were doing it for me or what they were doing for me."
"It wasn't until about a year ago that I started to really look at the whole thing in a kind of sane and rational way. I find I get far less uptight than I used to, noticeably less distraught before gigs."

And how had Joe Public reacted to his idol suddenly sharing the limelight with four other guys, albeit talented musicians?
"Shocked and stunned, for about 20 or 30 minutes. Except, for instance, in Edinburgh they weren't shocked and stunned because the last time I was there I'd made a point of really laying it on them. Like: 'This is definitely my last gig here on my own. This is the end of the one-man band.' So people came along saying, 'OK, he's not going to be on his own. So what's he got?' So they came with that in mind - that's great."

"Of course, there's always that section of the audience that shout out for older songs, acoustic songs. At the moment, it's just not what I want to do. You know, you don't get a dog and bark yourself, do you? Stood there like a lemon with Max Middleton and all these other punters just stood there, and me warbling on."

Paradoxically, though in his music he appears to be turning his back on his folk roots, the reverse is actually the case, and he had already agreed to try to fit in a benefit concert Dick Gaughan is organising in London at the end of February for a conference on where the folk scene is going and where it has gone wrong.4
"Yeah, I'm definitely getting involved in that. I mean, I would do anything that I feel is a good idea. You know, if you can actually make a statement by just walking on to a stage at a given time and place and just by your very presence -you don't have to make any speeches or anything- just by your very presence and musical force say something, why not do it? I mean, I don't relish the thought of playing in Cecil Sharp House, I can tell you. I was thinking about it yesterday when Suzie Stockton rang me up and asked me to do it, Max was here and he said: 'Jesus, when you walk into that place it's like going back 100 years.' Yeah, but that's the point, man, isn't it? That's what it's all about."

"I don't hold with a great deal of it, especially the conservatives in life that you find on the folk scene, I don't hold with that at all, I think it's dreadful. But you see, the Roches came up through all that business, and they're wonderful, aren't they? Billy Connolly, he got his first gigs in folk clubs, I got my first gigs in folk clubs, Gerry Rafferty, Ralph McTell, all these people. They wouldn't be about if there hadn't been a local folk club."

"But in general I've always preferred the people on the folk scene to people in the rock 'n' roll music scene, just because it's a straighter scene. There is an awful lot of back-biting to rock, there is in all these professional scenes. You know: 'No, you can't borrow my echo'. Or: 'Turn them off, they're going down too well. Turn the PA down. Pull the plug out on one side.' All that shit really, really annoys me. I saw a lot of that on American tours, really horrible. It's like a professional foul, it's accepted because everyone does it. I put myself about less now. I do a lot of fishing, very quiet pursuits these days. You get enough lunacy on the road."

This all adds up to a very settled, relaxed person - right? Wrong. Just as we finished talking and left for his final gig in the British tour -in Glasgow,5 naturally- he dropped casually into the conversation the fact that the tenancy for the house is up in three months, and he plans to go and live in the States for a while after Gillian's baby is born.
No wonder he says he hasn't found his identity in Scotland. As he says, either he never will, or he never lost it in the first place. I tend to incline toward the latter view.

sitenotes:
1 No idea who this person might be. She came before Annie Furlong.
2 Grace & Danger was held up by Island's Chris Blackwell because he found the record too disturbing.
3 10 Tantallon Road, Glasgow.
4 No confirmation yet as to if, when and where this conference took place.
5 This means that the interview probably took place 10 November 1980, before the Glasgow City Hall performance.