Mark Plummer
Melody Maker
Articles
Interviews
Martyn turns on
"I'M trying to pull electric into acoustic and acoustic into electric."
John Martyn was rushing through the offices at Island Records' converted church office block come studios just off Ladbroke Grove, looking for somewhere to sit and talk in a bit of quiet as the building buzzed with every-day work.1 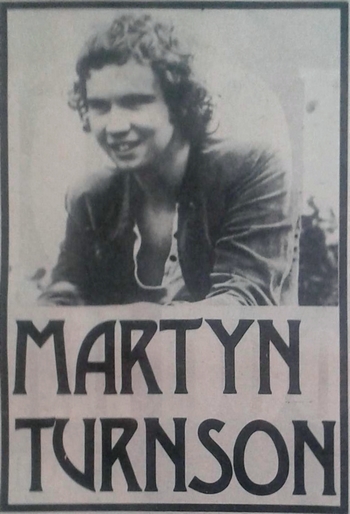 Martyn, acoustic musician, electric guitarist and songwriter-performer, is a gentle looking young man with wispy curly hair, earrings and a collection of gentle songs. They're not all happy little numbers. But he points out that there is enough pain in the world, and in people, without him having to resort to putting more on people, like John Lennon does.

Eventually we settled down in the basement studio. While engineers were preparing for a session, we sat and talked about his music and how he became interested in playing electronic music after a fairly normal folk tradition background, where he was best known for his work with his wife Beverley. Martyn is a musician who mainly works the club and concert circuit, but the set he played recently on the Old Grey Whistle Test2 must have brought him to the notice of a lot of rock and rollers.

He played two numbers live on the show,2 an acoustic piece, and a longish semi-acoustic guitar number which explored the use of Copycat and more especially the reverb unit on his Fender 30 watt amplifier.

John Martyn first thought of playing electric guitar after he heard The Band's Music From Big Pink. It was not so much the volume that excited him, but their use of textures in the electric guitar. Before that, one feels, he thought the electric guitar was used for its aggressive features, but The Band showed him that it could he used in a more subtle manner without having to resort to pure violence.

The strange feature with his playing is that while he uses the tones of the electric guitar, he models his use of notes on the saxophone, especially people like Coltrane. At the moment the people he listens to most are John McLaughlin, Terry Riley and Miles Davis.

His love for the jazz side of contemporary music has led him to the point where he feels stranded between two sides of music, where he is not in a position to play with the people who he would most like to. He's looking for musicians with the same roots as his, but he shrugs his shoulders and says: "It's all right, I'll find some musicians to support me."

Martyn wants to get a small tight rock band to record with. But when it comes to taking such a unit on the road he would prefer to remain a solo artist, free from all the hustles of going on the road with three people and a p.a. He finds it easier just to get on a train to his gig armed with his guitar and an amplifier.

"I want to get a band together to record with. But going on the road with a band? I don't know that I could get that together. I've been on the road with the Bronco tour,3 and there are so many things that can go wrong. The travelling organism is so impractical. I'm convinced there must be ways of getting a band on the road without all those silly little hustles."

The trouble is that if he got a band of his own on the road, it would not fit his easy-going way of life. Sometimes he doesn't even feel like playing electric at all, but the anarchy is slowly disappearing as he gets used to having a big business behind him. For five years in the small, but lucrative club circuit he played gigs when people called him and asked him to do so.

Now he goes to his management at Island to find out where he is playing, to get road details sorted out, and to pick up tickets to places. The change in his life could have drastic effects on his easy-going attitude, but as yet he has managed to keep his importance in perspective.

Martyn lives by the sea in Hastings, and this seems to have softened his music, especially the electric side. But he is quick to argue that people use electric power in the wrong way, and that it need not be violent and aggressive.
"That's what I mean about electric music. It has always been thought of as aggressive. The notes are more important than the way you play them. The notes I play and the way I like playing them – there's no way in the timings I use or the notes to make them aggressive. The electric thing has been used as an assault but there is no need to get into a power thing. I don't feel that is what I should be doing."

Talk to Martyn about the audience he wants to get through to, and he says, "Everybody." But at the same time he knows that his audience is going to be restricted to people of his own age and awareness. In their way, both the acoustic and electric parts of his act work against each other. For folk purists, the inclusion of an electric instrument is sacrilege, and with electric freaks the acoustic set is boring.

"I seem to get through to freaks of my own age group. I would say 60 or 70 percent of the audience who get off to my music are in that bracket, but I don't think that is totally my own fault. It's just a shame that a lot of people will not accept both sides of the instrument."

sitenotes:
Visually the title appears to be 'Martyn Turnson' but this seems to be a typographer's mistake as the whole context is about going electric.
1 So the interview took place at Island's Basing Street Studios, 8-10 Basing Street, London (Notting Hill). It is unclear whether John was recording at the time. Bless The Weather had just been released and Solid Air came out one year later.
2 First OGWT episode aired 18th January 1972. John played Bless The Weather and Glystening Glyndebourne.
3 This was quite recent, John toured from mid-January until mid-March 1972 with Bronco and Claire Hamill.
This interview was published in Melody Maker of 19th February 1972, page 21. Picture kindly provided by John Neil Munro.

| Elliott Franks
John Martyn live at The Anvil in Basingstoke on the 27th April 2004 mad to think this was 16 years ago… https://t.co/fmbKEx3uCY
1 month 1 week ago
END_OF_DOCUMENT_TOKEN_TO_BE_REPLACED