JOHN MARTYN, whose forthcoming British tour will be his last in the foreseeable future, is to sell his new album from his home on a mail order basis.

The album will be issued in a plain white sleeve and is available in a signed limited edition of 10,000. Price £2.50 p and p. 50p extra, from John Martyn, 10, Cobourg Place, The Old Town, Hastings, Sussex.

Island Records state that the mail order basis exists only with regard to this untitled release, available from September 12, and has no bearing on Martyn's long term recording contract with them.

The album was recorded live at Leeds University and features Danny Thompson on bass and John Stevens on drums. It will be on sale at all venues of the tour while stocks last.

More dates will be added as the tour progresses. But the final date will be Martyn's last in Britain, and possibly the world, for at least a year as he wishes to travel while concentrating on writing new material and devoting more time to his family.

sitenotes:
This story featured on page 2 and is probably based on an Island press release, as an almost identical piece appeared in Melody Maker of 01 Sep 1975 ('John Martyn Plans Last Gigs'), and in Record Mirror of 06 Sep 1975 ('Mail order Martyn').

THERE IS a marked improvement in the condition of former Free guitarist Paul Kossoff, who was on the danger list in a London hospital last week. The exact nature of his illness is not yet known, but he has undergone extensive tests, the results of which will be known very shortly.

At one point, Kossoffs heart stopped for 35 minutes - and he also had a kidney complication. His management, however, are optimistic that he will be out of hospital in two to three weeks.

Tickets for his projected British tour, due to start September 30, are still on sale, but whether the tour in fact takes place will depend on Kossoff's progress. Meanwhile the rhythm section of his band will form part of the backing musicians for the Shusha concert on September 15 at Queen Elizabeth Hall. 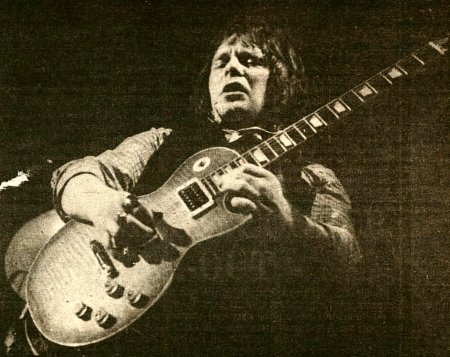 ANOTHER ILLNESS in the music industry this week. Glen Hughes of Deep Purple contracted hepatitis while the band were recording in Munich.

Hughes was rushed home where he is improving and will be back with the band in the next few weeks.

Related to:
Live At Leeds

| Paul Hillery
@bigmuffsite found this but didn't see it on your concert list https://t.co/NurVAf1AVs
10 months 2 weeks ago
END_OF_DOCUMENT_TOKEN_TO_BE_REPLACED