The man who put the sap in Sapphire

Barney Hoskyns
New Musical Express
UK
Interviews
the man who put the sap in Sapphire
Somewhere under the rainbow -Chelsea, to be precise- ex-hippy John Martyn and ex-schoolboy Barney Hoskyns swap views on bohemianism, the Bahamas and lemons on fuzz guitar. Pic Stephen Oxenbury.
COSMIC JOHN Martyn at the Dominion a fortnight ago1 was the first time I'd seen this beer-swilling beat hippy since I snuck in the back of the Victoria Theatre as a schoolboy in 1975 and watched him workout with double bassist Danny Thompson and jazz drummer John Stevens.2 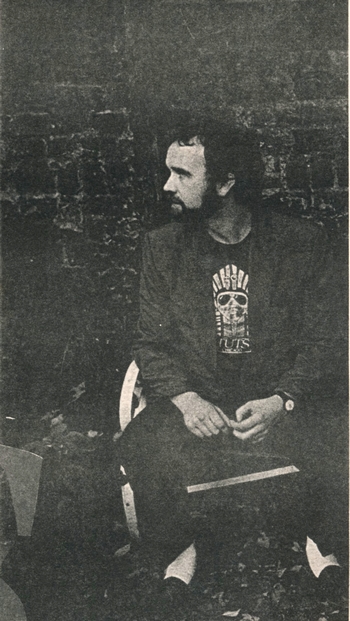 It was another three-piece who shook the Dominion silly, only this time his colleagues were a percussionist and an octopoidal Scots keyboard player who made a great deal of noise, not least in the artificial beat register.3

John was not exactly being a doormouse himself. The starry-eyed shepherd, who once claimed he yearned to play lead guitar in a 'dirty' rock'n'roll band, cooked up a manic din with the aid of almost every guitar gadget and pedal in the Charing Cross Road.
"I guess I'm a little arrogant," he later confessed, "but then anyone who's played fuzz guitar and hasn't got some sort of arrogance in them is obviously a lemon."

Martyn is quite a brash and hearty fellow and not at all the weird seer I constructed in my mind that summer I spent with the ear pinned to Solid Air.
"How can a prat like me make such nice music is what you're saying, innit?" he imputes.

Not true, John, I just had this feeling from that spacey, sensual music, those drifting jazzfolk meditations... Danny's bass buzzing and humming under your slouching, slumbery voice... the pre-ambient echoplex effects of your guitar... Rabbit's shimmering electronic piano... the breathy acoustic lullabies... I don't know, I just thought...
... And think of Tim Buckleys and Joni Mitchells and Rickie Lees and that beat beatitude between pop and jazz -precision and luxury- and I remember that I played Richard Davis' bass lines on Astral Weeks against Danny's on Solid Air and reckoned I'd hit on something.

"I thought the bass playing on Astral Weeks was abominable, actually. Sorry."
John Martyn will do this, won't he? He will surprise me. He will make me think of those smart hippies who meet in the Chelsea Potter, those veteran SW3 types, who maybe got into harder drugs after the last bad trip but don't bother to call Marianne anymore even though Why D'You Do That? is their washed-up adulterous anthem. He will say that Astral Weeks is a pièce de merde.

JOHN THE piss-artist Lad is just back from the Chippenham gig (you know, the Chippenham gig)4 with his lovely and willowy wife Anne, and we are installed next to a damp fireplace in the Chelsea Arts Club; another splendid dive haunted by old relics of the '60s, where John kips on his infrequent trips to the capital. He calls me "lad" but will not be referred to as a relic in return.

"Egad! I say, have this man ejected! Relic! I'll have you know we've got the leading lights of the video and fashion worlds here! Good God! I hope you never apply for membership, old boy, I'll have you blackballed immediately! Relic! I know I'm sitting in an armchair but this is more than I can stand!"

This jesting tantrum is not the only Monty Python skit John the Lad performs. He does quite a few turns for the benefit of his wife, his roadie and myself. Suddenly he's from Blackpool as he recalls the sun'n'sand of the Bahamas, where his new album Sapphire was recorded; then an earnest university lecturer for his disquisition on the faults of contemporary pop music; and finally he's a Jamaican engineer at Compass Point confirming that Over The Rainbow "soun' cool, boy!"

All this clowning makes me think he's running away from something. He certainly won't talk about tragedy and ecstasy and all that.
Sapphire is a good record; straightforward but a return to real strengths after the coarse and unpleasant Well Kept Secret and the heavy metal folk of the Phil Collins-produced Glorious Fool. It's the Robert Palmer Compass Point soul sound, propelled by Linn drums and swathed in keyboards.

"To be expected really, considering Robert did a lot of the stuff on it. What happened was that I was working with a producer who shall be nameless (I suspect Lee Perry)5 and he made me nervous and I made him nervous, not a good combination for being in a studio. So after we'd done about ten tracks I went over to Robert, who lives across the street, and said: 'Look, I'm not getting on very well here, would you fancy lending a hand?'"

"He injected a whole lot of enthusiasm, brought me in a keyboard player from New York who was phenomenal,6 and the whole thing worked out very well, even if I did behave atrociously from the moment of my arrival."

YOU'RE PLAYING very little guitar on Sapphire.
"Yes, that was a conscious move. I was still getting out of hassles with my ex-management, who'd frozen all my assets so that effectively I couldn't work. In any case I wasn't in the best form for playing. Didn't mind singing and producing so much, but I didn't feel like playing. To be honest, I play so much live anyway that I quite like the idea of an album with no John Martyn guitar on it."

I like Coming In On Time, which sounds like Weather Report with Michael McDonald singing.
"Mmm, in the higher register. He's very good, isn't he?"

Anything you've heard in the last year that might have affected this record?
"No, apart from everything. I was just working off the memory banks, I wasn't listening to much music at all. I don't listen to much music. By proxy, I pick up a lot of stuff from the radio, but I don't like a lot of it, I'm not wildly keeeen."

Do you feel more out-of-time as you go on?
"No, my distance remains the same, I think."

How do you see yourself?
"I try to maintain some sort of bohemianism. I would like to be thought of as a boheeeemian, that's what I strive for, which I suppose is not actually quite the point, since one shouldn't have to strive for bohemianism..."

A rural bohemianism, though.
"Oh, absolutely, I couldn't stand living in cities anymore, I just can't make it."

Once you described people who get up and sing about themselves as "ludicrous". At the same time, you've said that where some folks keep diaries, you make records. How many times have you really bared your heart on vinyl?
"More times than I care to remember! I've been at it so long that I think any self-consciousness about it has worn off. I mean, I started learning to write songs and play guitar at the same time, so I've never been forced to consider it in anything other than a natural light. It just seems to be what I do, I don't really question it or mess about with it too much. If I were to think about it a lot, I'd probably lose enthusiasm or find some reason why it was a bad idea, so I tend to avoid thinking about it."

I can think of a few 'artists' who get by with just the hands bit.
"One would look to be an artist. That's my aspiration, anyway. One day I suppose I'll be able to accept that."

There's no songs which have been, in Nick Kent's phrase, exorcisms for you?7
"Kind of helps to get it off your chest, I suppose, if you're feeling particularly miserable.
I mean, it's de blooze, innit? Ah sings de blooze coz ah feels down. I suppose it's that... that's as close as I could come to it, I don't think there's any great intellectual depth to the process, I think it's just as simple as playing coz you're miserable and playing makes you feel better. I mean, there was a grain of truth in what Nick Kent wrote about me. No question about that, but it's not the sort of thing I like to think about. I don't wish to shirk anything, but it becomes too responsible. If you take those parameters seriously then one would have to maintain rather more responsibility, and I just find it's dangerous to think too much about it."

Are there any other musical accounts of breakup and despair as moving as Grace & Danger?
"Billie Holliday is the one, actually, she has the last word on all those subjects. I mean, she's done it. That's it. I'm a lunatic for Lady Day, I get so affected by her I can't listen to her much. It's a bit too heavy, too sad. Strange isn't it? Silly amount of power to be confined to one frame. By comparison with her, though, everyone else is wet, unless you get into the classics. I mean, Debussy's very heavy, Tchaikovsky's even heavier... you can feel the mania there."

Why do people listen to music? Why does it exist?
"I think people listen to popular music, as made by popular groups, to tap their feet and be distracted. People listen to serious music in order to be moved in some way or other. You can't change anything through music, you're not gonna make a lamb out of a lion, but you can reinforce ideals and ideas. People have been given hope and faith or something like that... they get less of a feeling of aloneness if they hear someone who's obviously going through the same shit as they are. And if they hear someone saying listen, it's not as bad as you think it is, then they'll gain some sort of strength from that."

sitenotes:
1 Dominion Theatre, Wednesday 14 or Thursday 15 November 1984.
2 Victoria Palace Theatre, Sunday 2 February 1975.
3 The keyboard player was Foster Paterson, the percussionist probably Danny Cummings.
4 John played Chippenham, Golddiggers on 19 November so that's when the interview took place.
5 Barry Reynolds as a matter of fact - having replaced Wally Badarou who went out of the window even before recordings started.
6 Jack Waldman. "He came from New York to Nassau and completed fifteen keyboard tracks in two and a half days. Just like that! Unbelievable."
7 Referring to The Exorcism, an NME interview from 29 November 1980.
This interview was published in the Christmas issue of New Musical Express from 22 December 1984, on page 32. The accompanying picture shows John wearing a t-shirt from Tuts, the Chicago venue he played 21 May 1983.

| Paul Hillery
@bigmuffsite found this but didn't see it on your concert list https://t.co/NurVAf1AVs
9 months 10 hours ago
END_OF_DOCUMENT_TOKEN_TO_BE_REPLACED