Love is the Bug 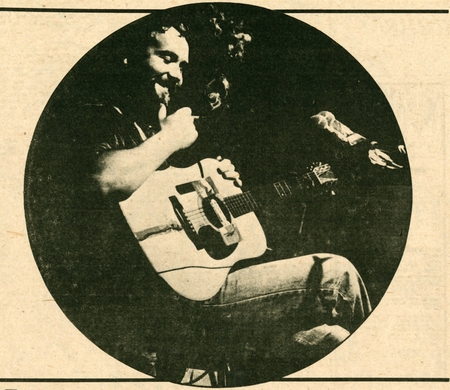 Love is the bug
... for John Martyn, pacifist, anti-Nazi and tough little Good Guy. JOHN ORME copped a few likely quotes from the man himself on the eve of his new British tour.1
JOHN MARTYN, weaver of musical dreams, writer of electric love songs that speak for today with a small part of yesterday's soul: "I am inspired now by the same things that have always moved me, I am mainly writing love songs. I am more interested in love than anything else, unfashionable though it may be."

John Martyn, headstrong, dominant, a thick dose of tough Cockney slang lacing his voice in conversation with an old friend and ex-villain he calls Precious Boy; Martyn the fighter. "I've got a song called Black Man At Your Shoulder. It worries my record company and management because if I put it on a record they think people will misunderstand me and regard me as racist and right-wing. I don't think people will misunderstand. I hate the Nazi thing that's going on. I hate it more than anything. I'll do whatever I can to fight it."

ALTHOUGH he's been aware of the growth of groups like the National Front in Britain for several years, it has taken that organisation's more overt street activities to lure Martyn out of his cradle of apolitical inactivity and into the very real battle of political opposites that is fermenting in Britain.

He's already played some Anti-Nazi League shows, and plans to do as many more as he can; but rather than try and construct songs around the banal slogans that reduce the issues to scandal-sheet level, he hopes to use the fact of his concerts and songs to play his part.
"The only song I've written with what you might call an overt political message is Black Man At Your Shoulder, which has the chorus line, 'Ain't you scared of the black man at your shoulder?' running through it. There is this worry by some people that audiences will take that at face value, not thinking about what I am singing, and assume I am a racist or whatever."

"What I'm saying in the song is that people should really take a look at their fears and prejudices and try and see the reason for them. I'm sure that half the problem of colour in this country is caused by blind unreasoning panic, which is just what people like the NF feed on."

"By asking people 'Aren't you scared?' I'm trying to get them to really examine the scapegoat mentality - you know, when you go into your local and find that the pint and short you used to have, costs as much as a pint now, and you look at the black guy next to you, and he's got a pint and a short, so you blame him. You're almost taught to look for a scapegoat, for an easily identifiable minority to take the blame. And that is where the fear starts, and that is where you have to start realising that that guy next to you in the pub has got nothing do with the fact that you can't afford what you used to."

"When fear comes into it, then you're dealing with dangerous feelings. I don't think that fear is a reasonable emotion; it is a small death. I know that whenever I've been violent it's because I've been scared - and that despite my being a totally convinced pacifist. Head-wise, at least. But sometimes I just get sick of the things that go on."

"Now I would definitely go out and support the ANL - the rise of Nazi movements in Britain is one of the very few things that would get me out of my pram. I've been apolitical for years; I mean, I refuse to vote for the lesser of two evils."

WHAT really got me going is the way the National Front seems to be coming up with the old God, King and Country line, the same bullshit that they called my old man out for. The whole nationalism thing was a lie then, and it's a lie now. It's one world, after all, everyone's in it together."

"Don't get me wrong, I like the aesthetics and cultural aspect of nationalism, like I'm proud of my Scottish background and the music it gave me. But the national idea has gone now, it's redundant."

Martyn was quick to argue that it is only because the National Front has the freedom to disseminate their opinions that he has been alerted to their threat.
"The NF must certainly have the right to say what it wants to, otherwise you're introducing censorship. But I think it's very important that the right of reply should be there and exercised especially by the silent majority."

"I know far more black racists than white, but I suppose that's because I mix with far more black people than right-wing whites. But it doesn't matter, racism still sickens me wherever it comes from. I'd do as many ANL gigs as I can, but I can't make speeches. The only contribution is to give my songs to people. The trouble with these anti-racist gigs is that the only people who go to them are anti-racists."

"I'm hoping that I can press for Black Man At Your Shoulder to go on my next album2. The strongest reaction I've had to it came when I played it one night at a gig and then left it out the next. Two black guys who saw both shows came up afterwards and said: 'You played that song last night, but not tonight. What's the matter, have you got scared?' They understood what it was all about."

HOWEVER strong his political commitments, Martyn rarely introduces the red meat of his views into his songs. A strange omission? "I wish my songs to remain beautiful, and political preaching is an unpleasant activity that I prefer to keep out of my music. I hope people can sense what I'm about when I play gigs. I don't need to be overt about it in songs; but if it comes to the point of standing up and being counted, I'll be there."

His new material, ready for recording early next year for his new album, deals with areas of life familiar to his established audiences.
"The same things as ever move me. I only write about things that move me, and I'm fortunate in that my life works in varied ways. I'm not in a rut."

With love as his prime preoccupation, his Big Deal, Martyn is working in an area that has been ransacked by less considerate writers and plundered ceaselessly by pop merchants who've milked the life out of every cliché.
"Certainly there is a shortage of vocabulary, and that shows itself when the clichés start cropping up. But when you speak it out and think about it, music itself is a cliché."
"Although the structure of music inevitably means that somewhere it's all been done before, within that I think I'm an original. I've watched myself on television, the way I sing, the way I play guitar and the way I write my songs. I can't think of anyone who I pound like, look like or play like."

"I like that. I feel good that I can believe that no one else ever before, has played guitar like I do. That's important to me. I think I'm pretty good now, but I hope to get a whole lot better, to make a bigger contribution."
"I've been quoted as saying that I would be the guv'nor by 353. That'll happen, or maybe it'll be 37."

WITH new songs ready, Martyn is preparing for a tour of British universities and colleges1. As has been his habit over the last 18 months, he will play solo sets, abandoning even the back-up of his faithful bassist, Danny Thompson. He'll travel light, with a small, close crew, in what the manufacturers call a mobile home.

"I really hate the travelling side of a tour - all that finishing a gig when there's nowhere to go in a town, tumbling into the Star of the Himalayas or whatever for the obligatory Indian meal, then back to the hotel, waking up the night porter, trying to persuade him to open up the bar to satisfy your alcoholic needs, and you end up with a little bottle of spirits out of the fridge, and you think that an hour before hundreds of people were screaming out your name, and there you are perched on the end of your bed, absolutely knackered in some dead-end doss house. It is a terrible cycle, and I decided I wanted to break it."
"If it all works out I'll have my mobile home, so I can sleep where and when I like, do my own cooking if I want to."

Martyn will be toting his quad sound system round the country with him, and will be using his solid Gibson SG electric guitar more than the familiar acoustic-through-Echoplex, a vital part of his sound that he admits he is still learning about, especially on those tricky slow settings that lengthen the delay and bounce any mistakes back at the player about five times.

With an audience in front of him, Martyn has some of his happiest moments, although the thought of a solo gig can still give him a nervous twitch or two.
"Different audiences will give you different challenges, both satisfying if it works, but each putting separate demands on you."

"The last gig I did was supporting Eric Clapton in America this summer, and we were playing those really big places where probably only 1,000 out of 30,000 people in an audience had heard of me at all. That sort of unknown audience gives you a rough, harsh challenge - you have to go straight in and hit them hard, they're wondering who the hell this limey is and what he can do."

"With my audiences in Britain, it's a more sympathetic thing. They want you to play well and not have a bad night, that's a more refined challenge. Then I try to balance my own favourites, the songs I really like playing, with what the audience wants to hear. It usually works out as that sort of compromise."

sitenotes:
1 November-December 1978.
2 Never happened. Black Man At Your Shoulder first saw its 'official' release as a bonus track on One World De Luxe, so as late as November 2004. As a bootleg it became available March 1999 on Another World.
3 Interview with Geoff Brown, John Martyn with Love; Melody Maker 16th February 1974. However, virtually the same quote was used in Geoff Browns interview John Martyn Inside Out of 13th October 1973, also in Melody Maker.
This interview was published in Melody Maker of 4th November 1978 on page 51.

| Big Muff
Photographical mystery solved - except for the name of the photographer https://t.co/oSCnGikFSx
3 months 3 weeks ago

| Big Muff
Blast from the past: Guitarist interview from 1985. Ever heard of Scheme? https://t.co/Qg4tDy0zEX
4 months 2 days ago

| Big Muff
End of the one man band, with #johnmartyn https://t.co/5gR9OZOsDH
4 months 1 week ago
END_OF_DOCUMENT_TOKEN_TO_BE_REPLACED