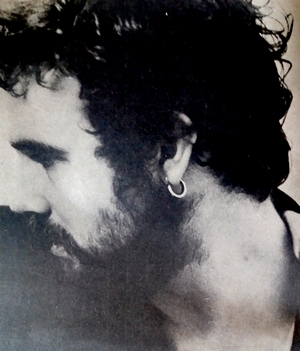 JOHN MARTYN'S music belongs firmly to the night; a nocturnal conception designed for consumption after hours.

His newly released album Sunday's Child follows a familiar formula - it's an album of mood music that only comes to life after dark so that one immediately recalls his penchant for booking studio time at Island between the hours of midnight and dawn.

Aside from a cameo appearance by wife Beverley,1 who finally looks set to make her own recording comeback, the album features familiar names such as Danny Thompson and Kesh Sathie, who with Tony Braunagel form the basis of the rhythm tracks behind an album of love, abstraction and John's own stylised nod towards the great folk heritage. A sequence of Mairi's Wedding is his concession to the Scottish legacy whilst Spencer The Rover and Satisfied Mind are beautifully interpreted.

John was busy rehearsing for his current British concert tour in the company of Danny Thompson and John Stevens at one of the Island complex playrooms, calling a halt to talk about future plans late in the afternoon; somewhat incongruously he was wearing a three piece suit.

When it comes to predicting John is invariably diffident, but presently America has very strong plans for John's future - so much so that the Martyn family are strongly considering a permanent move to somewhere like upstate New York in the Woodstock area. "It'll be after the baby is born next year," he explained.

John has long maintained that the kind of musicians he would like to work with -Danny Thompson excepted- are not to be found in Britain, although his main reason for moving would be that touring would become a more economic proposition in view of the demands that the States are making on his time.

He still claims that playing comes instinctively, just as following a pattern does.
"I'll probably get stoned and go on and play about a two hour set on this tour," he went on. "But at the same time we shall definitely do songs and not jam - I intend to do at least a dozen songs. I think I've got a distinctive style and that's what I'll continue to work on," he says in qualification of his developing individuality.

Martyn continues to create some of the most hypnotic waves by putting his acoustic guitars through electronic processes, but he has only been able to build on top of a fine fundamental technique, and to this day he evokes more acoustic dynamics from the basic acoustic instrument than most of his peers, and it is this fact alone that eliminates any question of gimmickry from his inventive endeavours.

Yet indisputably many of the Martyns' early admirers would welcome further work from Beverley and early this year she intends to cut an I album.

John, meanwhile, reflects fondly on his own studio exploits. "We did one marathon fifty-eight hour session and we all had a lot of fun. By and large things went down fairly smoothly although it's always the simplest parts that are the hardest - this time it was Clutches that gave all the trouble, and that's a basic twelve bar."

An unusual dichotomy is that whilst John takes a keen interest in what the press are saying about him, he has very little interest in his music in terms of commercial success.
He never inquires after sales and doesn't possess one album that he has ever recorded. "In fact Bev's just gone berserk about that and we've had to order them up from Island - our kids won't believe us if we don't keep them."

In March he heads back to the States2 and hopes to tour with Chick Corea, pointing out that black audiences invariably treat him kinder than predominantly white in any event. But he denied that his real reason for moving to the States would have very much to do with the overall higher standard of musicianship.

"When I first started playing with rock groups I used to think 'What a load of rubbish', and it still hasn't changed – there's too many about. There's an awful lot of bad music and the States is worse than here. In fact the whole thing has deteriorated since I last saw you."

Of one thing he is adamant - the music world could not afford to lose the like of Nick Drake, who was a close friend of John's.
"It's the first time I've ever been exposed to anything at such close range. It's a great waste and a great shame but I would say it's the world's loss and not his." - JERRY GILBERT

sitenotes:
1 Beverley contributed to the vocals on track 4, My Baby Girl.
2 I have no confirmation this actually happened.
This article was published in Sounds magazine of February 1st 1975. Material kindly provided by John Neil Munro.
Related to:
Sunday's Child

| Paul Hillery
@bigmuffsite found this but didn't see it on your concert list https://t.co/NurVAf1AVs
4 months 3 weeks ago
END_OF_DOCUMENT_TOKEN_TO_BE_REPLACED