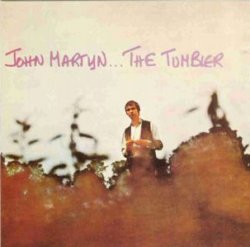 Al Stewart looks back on a friendship snuffed out by prune mallets, dark drugs and Scottish insults.

I MET JOHN MARTYN at this little club called Les Cousins. Everybody from Paul Simon to Donovan to Van Morrison to Jimi Hendrix and every folk singer you can think of played there. Some of us practically lived there. It was open round the clock. For a while in its heyday it was open every day of the week from 7 till 10 or 11. And then at the weekend it ran from 7 till 10 then 12 till 7a.m. Odds are I met John Martyn there as that's where I met everybody.

The first time I remember him was when he had his first album out, London Conversation. It had a very catchy song - (sings) "If you want to ride a rainbow come with me..." - which I've forgotten the title of (it was Fairy Tale Lullaby - Ed) but it sort of reminded me of the Incredible String Band. I had the record and round about that time we started hanging out a lot together. He'd come round my place a lot and we gigged a lot together. We would go down the Cousins together.

He was night and day away from what he became. He was very light and buoyant, almost elfish. He was bouncing around with a smile on his face. If you want one word to describe him it was 'Tigger' (laughs). And back then it was all natural energy. Very smiley and 'What a wonderful world, and I can make it better with playing the guitar'. We played the Hanging Lamp in Richmond and I remember going there with John, talking about Scottish warriors and having this long conversation about the various implements of torture they might have used. I remember he came up with 'the prune mallet'. For some unknown reason this phrase 'prune mallet' completely broke both of us up and I remember I giggling six hours straight, trying to do this gig with John making these 'prune mallet' signs at me.

There were already many of our fraternity who were experimenting with substances and John was appalled by this. I remember John had a birthday party that everybody went to and someone was smoking dope in his bathroom and he got very upset and threw them out into the street. It's hard to explain how different he was. He had a very cute Scottish girlfriend and he was a pleasure to be around.

I thought he was very talented, he was sort of like the new kid on the block. In the folk scene at the time the big names were Bert Jansch and John Renbourn, then right behind them were Ralph McTell, Roy Harper and myself, then right behind that was the next class of the folk scene that John Martyn was in. He just seemed to me someone who was very talented and jovial, with a great personality and I thought he would do tremendous things.

London Conversation had come out on Island so I had to go see Chris Blackwell about producing The Tumbler. Until then I hadn't really realised what producers do. The most important thing to John when we started producing that record was that he wanted Harold McNair to play flute. So, in my capacity as producer, I had to go and find Harold McNair. I was surprised that he agreed to do it. Here we were making a little folk record and he's a well-known jazz musician and I didn't think he'd agree to do it. Now I know, of course, that jazz musicians are permanently broke and they'll do anything. We were a bit in awe of him and he came in and played the flute and it was all great and then I took the record to Chris Blackwell and he seemed to like it and out it came. I don't think it could've taken more than a couple of days as budgets were minuscule then; one or two takes and you move on.

So The Tumbler came out and I kept in touch with him probably until Stormbringer, around the time he hooked up with Beverley. He had a romance and as inevitably happens you don't see them as much when they're in a relationship, although I continued to play shows with him.

When he was with Beverley, I didn't notice him being different, although there was a little bit of darkness there. I think the first time I was really aware of it was probably late '69/'70. It surprised me as he'd always had a charm. But then I have a very vivid memory of when he was on tour with Danny Thompson, probably around '75.

I was on the road and I was staying in Leicester in a Holiday Inn and I came in about 1 in the afternoon. I was dropping my stuff off and I saw John Martyn and Danny Thompson at the bar I thought, 'I know these people!' so I decided to go up. John was standing there and his eyes were red, this was 1 o'clock in the afternoon and he was completely drunk and hostile. I'd made a record called Nostradamus, which everyone was making a big fuss about and he looked at me and said 'Oh... it's you! Is Nostradamus still coming to get us then?' Not playful, he looked very angry and very drunk.

I thought, 'What is this?' I was talking to Danny and he was out of his head. I didn't know what it was and I didn't want to know. I thought, 'OK, fine. Sod this.' I didn't see him for quite a while after that.

Next time I saw him was at Durham University. And then he did something absolutely extraordinary. He'd finished the gig and we were standing outside the university and the train station was a mile away. John picked up the Fender amplifier, a heavy Fender amp, put it on his shoulder, and walked straight past me into the night in the direction of the train station. I thought he must be insane. I watched him for 100 yards and thought this must be a joke, he's going to put it down, but it wasn't and he didn't and I thought there was something strange going on in this man's mind.

We'd started out with a similar sensibility but we ended up divided by the drug culture. Most jazz musicians wore it like a badge of honour. It was fashionable and almost a rite of passage in the jazzier side of music at the time, which I wanted nothing to do with. It just didn't appeal to me, but I think he thought I was a little prissy and middle class and I should have been shooting up in the bathroom before I played.

Also, I think that when I first met him he was a little bit of a hobbit, and he needed some separation from being Mr Cheerful and if he wanted to hang around with the people he was hanging around with he needed to project a harder image. To some extent I think that's what he was doing.

From that point onwards we were in different worlds. I was fixated on going to America and in the mid to late '70s I started doing most of my work over there. And in '76 I moved there. I just lost touch with John completely.

The last time I met him was when I played the Bottom Line in New York. I was coming out of the show and he turned up outside on the pavement and he was drunk and he shouted, in this broad Scottish accent, 'I know you... I know you, you... fucker!' You know, meaning, 'I know where you're from, you don't fool me.'

I don't think I ever saw him again. It is very sad. In the back of my mind I always thought he would sober up and he would come out of it and when he did we would sit down and laugh about it all. In a perfect world that would have happened and we would've been friends again. But it's too late now and that makes me a little sad.

As told to: Andrew Male

This story was published on the Mojo music blog, www.mojo4music.com

| Into the Trees.
@David_Lofts @bigmuffsite That's really great. You sing that really beautifully - I'm not often taken with other p… https://t.co/3uovZ520tI
1 week 1 day ago