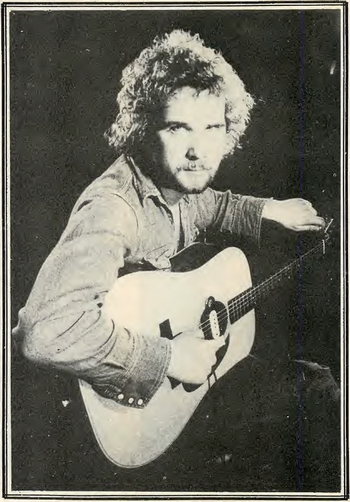 "MUSIC makes my heart go, makes me tick. The money doesn't really matter, if it didn't come in I would still go on playing, singing away. I'm just in love with music. That's me."
"I've heard some of this chatter before. Take the money angle. I've interviewed the stars in posh hotels where you might pay 40p for a cup of tea to be sent to your room. I don't care one iota if they opt for luxury and have their squad of Rolls Royces, but it's just a little sick when they look at you and say, 'Money, man, it doesn't matter. It's the music that counts."

John Martyn is the guy speaking those opening words. I believe him, even if I don't those myriads of other people. Talking with him is an experience and that's like his music. Maybe he's new to you, so let's fill in some basic details.
Music really began to grip him in 1967, at the age of 19. He turned to learning the guitar and, amazingly, after three months he had started recording his first album for Island.

The record brimming with his considerable potential, was titled London Conversation. Next came one called The Tumbler and if Martyn had gained favour in contemporary folk circles with the folksy flavour of his material, he astounded many of its clientele by putting a jazz saxophonist into his musical fray.

Love came to Martyn. He met Beverley and she became his wife and worked with him on his next two albums. Stormbringer, the first, has been described as a 'recording session and honeymoon combined', for which the two went to America and worked with musicians who since have become associated with the Woodstock/ Dearsville nucleus - people like Billy Mundi and Levon Helm. Road To Ruin followed, and working with John here was Danny Thompson, famed in particular for his work with Pentangle. He's stayed ever since.

Martyn talks of Thompson, "Danny is an inspired person and an inspired musician. He's a diamond. He always understands what I'm on about musically, verbally, everything. We just don't even have to try."

The album Solid Air hit early this year. It came at the same time as John's tour across America with Traffic and Free. He returned to play the club circuit. Solid Air is now followed with Inside Out.
A string of albums packed with original and evocative songs and yet Martyn can hardly be called a 'star' in the Bowie or Elton John sense.

I don't intend to make stupid comparisons other than to say his work is of immense value which deserves a much wider audience. All the same, fame can have its bad effects, draining an artist of valuable inspirational time, making him churn out material to meet ever growing pressures of people screaming, 'Man, whatever you can turn out we can sell. Just turn out something which doesn't infringe any copyright.'

And there he is, this autumn afternoon, sitting back in his chair, constantly bouncing forward, reaching for vodka and orange. Author of seven good and extremely good albums. And where do his ideas come from?
"Just by listening and looking at you, man! No, really. I get material by watching, listening and learning. I don't care if that sounds a bit school-masterish. That's it. There's plenty of things happening all the time, right around you. I suppose when I'm getting down to recording, I have the bare bones and melodic stubble. It's up there in m'head. Really is. No kiddin'."

"I feel I can keep getting better and better. Life is a process of learning. I don't expect to reach my best until, say, I'm 40. Too many people think they've got there when they're half that age and imagine they're pouring out great profound things. How can you when you've got to be learning? I met my wife Beverley and that introduced me to a richer experience. What I've got to do is keep myself clean, try and keep unpolluted in every sense. I have to steer clear, especially in song writing, of getting into a groove. A lot of people grab a formula and stay there."

"You talk of pressures. They started a long time ago. I tell you the pleasure has got to be there. I see myself as a musican rather than a professional. I guess I'm lucky with my record company in finding people who tolerate someone like me. I said about getting older and getting more and more know-how. I want to be a scholar-gentleman. I'm interested in spiritual grace."

"Take gigs. They're rather like rituals. You know you have people there who belong to your following. You have to be yourself and not be swayed by super-star ideas. You do your gig well."

"And money. I know only two people really happy with their money and I don't mean us! I mean people out to make money and that's their life-style. Money hasn't anything to do with emotional happiness.
The essential thing about living is having the courage of your convictions. I fall in love with peoples, especially the Celts, as for instance the Scottish and Irish. Truth is hard to come by these days. I guess I consider myself a religious person though I don't go to Church or anything. I don't adhere to any orthodox beliefs. People have to be decent, respectful and loving of each other. That's the only way to survive."

"I was born to play. I love to write. That's me."
And there's seven good albums for us to pick up and find out how he's getting along.

sitenotes:
Music Scene was a British colour magazine (info dug up by John Neil Munro). This story featured in a diptych 'Two masters of the guitar', together with John McLaughlin. In the same issue there was a short review of Inside Out. It had Bryan Ferry on the cover and originally cost 15p.

| Paul Hillery
@bigmuffsite found this but didn't see it on your concert list https://t.co/NurVAf1AVs
10 months 2 weeks ago
END_OF_DOCUMENT_TOKEN_TO_BE_REPLACED