TWO comments made in the past by John Martyn, who appears on the Yes bill, have defined his work as well as any lengthy analysis.

Firstly, when talking about 'Head And Heart', a track from Bless The Weather, his third album, John said: "I am somewhere in the balance between them."1 In other words Martyn aims to nourish both the cerebral and the emotional man.
Secondly, when talking about his gradual move into electric guitar, first sparked by hearing The Band's Music From Big Pink album, he said: "I'm trying to pull electric music into acoustic music and acoustic into electric."
Once again he is seeking a blend between the hard, clear cerebral tone of the acoustic instrument and the soft, mellow emotional flow of the electric guitar.

John Martyn, born in Glasgow in 19492, had established himself as a folk singer in Scotland by the age of 17. One of his earliest influences was Hamish Imlach, a rumbustious Scot who took John around the clubs and introduced him to those who mattered on the Glasgow scene.
He'd been inspired to play guitar and sing by hearing Joan Baez's recording of Silver Dagger. It's the only thing he's ever liked by Baez. 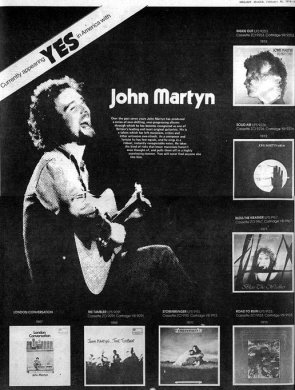 By the time he was 18, Martyn felt that no more could be achieved in Scotland so he moved South to London and worked the English folk scene exhaustively.
Down in the big city Martyn started his recording career in 1967 with an Island label album, London Conversation. A second followed, The Tumbler, before John met Beverley, a girl from Coventry who'd been playing folk clubs in a jug band. The two married in 1969 and now have two children, Wesley and Mha[i]ri.

They honeymooned in America and while out there recorded an album together, Stormbringer. It featured the likes of Levon Helm, Paul Harris, Harvey Brooks, Billy Mundi and Herbie Lovell. A good States feel pervades the 1970 record.
A second duo album, Road To Ruin, came out later that year, but the impending arrival of Wesley halted John and Beverley's musical progress.

John carried on alone. His next solo album, Bless The Weather, illustrated quite clearly the exploratory direction his music would take. Having honed his song-writing craft to a sharp edge, he now made a clear move toward developing his use of texture in music.
Martyn says his main reason for using electronic guitar was his failure to master the sax. John's music has steadily moved from the tight folk regime into a totally unspecific area. It is disciplined but unrestrained. It is jazz if in fact the music needs any label at all other than 'good'.
Martyn's blend of head and heart, of electric and acoustic, reached its peak, thus far, on his last album Inside Out. The traditional Gaelic air Eibhli Ghail Chiuin Ni Chearbhaill sees John approaching the sort of textures he has been seeking on amplified guitar.

Though John said that he didn't have the time to study sax properly, he seems in no great hurry to achieve 'fame' in the accepted sense of the word. In his early career he garnered a reputation for angry outbursts, often at the business side of music, for which he had, and still has, a great contempt.

Martyn is as fascinating a man as a musician. He firmly believes that his improvement is slow and that he will not reach his full prowess until he is at least 35 years old. "That's when I'll be the guv'nor," he says.
"The fact I'm a professional musician is an accident," says Martyn. "I didn't set out to be one. They came to me to record an album and I thought 'Why not?' Since then I've carried on just because I've had no desire to stop."

John has toured America twice now. He found the place exciting. On the first tour he played 35 dates in 39 days supporting Traffic. He played about 30-minute sets and because of the vast stadia Martyn found that he could only perform his "electric side".
After the tour he had eight days holiday in Britain and then he was back on a transatlantic flight. The album of the day, Solid Air, was still selling well and it was thought wise to get out there behind it.

John is now a firm devotee of concert gigs. He doesn't care he says, much for the folk club scene either in Britain or America. In the UK they are places to drink and talk; in the U.S.A. the audiences are especially hard on any "young kid who gets up to a floor spot. They jump in him and squash him."

But the essence of John Martyn is love. "I'm just beginning to learn why I'm playing. I'm a talented man and I can us[e] that talent in music. And music is an emotional communication. It can be used for good."

Scans kindly provided by Will McNeil.

| Paul Hillery
@bigmuffsite found this but didn't see it on your concert list https://t.co/NurVAf1AVs
4 months 3 weeks ago
END_OF_DOCUMENT_TOKEN_TO_BE_REPLACED