John Martyn emerged from the British folk scene in the late 1960s to make some of the most hauntingly evocative and mesmerising music of his era.

A virtuoso guitarist with a laid-back but highly expressive voice, he made innovative records that defied categorisation and thrillingly blurred the boundaries between folk, jazz, blues and rock. At his height, every note he played or sang seemed to be imbued with a spacious elegance and sublime airiness all too rare in the hurly-burly of modern popular music. 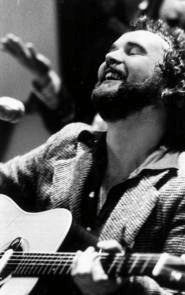 Martyn: every note he sang seemed to be imbued with a spacious elegance

Although he never attained huge commercial success, he was regarded by his contemporaries as a unique and inimitable talent. Among his collaborators were Eric Clapton, Steve Winwood, Dave Gilmour and Phil Collins, while successive generations of younger musicians have since referenced his work — particularly such peerless 1970s albums as Bless the Weather, Solid Air and One World.

In truth, by the mid-1980s his best work was all behind him. He was beset by personal problems and debilitating bouts of alcoholism that took their toll on his health, and his later recordings lacked the timeless mastery and magic of his early work.

He became infamous for his erratic live performances, falling off the stage on more than one occasion. Yet such was the enduring power of his early recordings that his fans seemed prepared to indulge and forgive him.

Iain David McGeachy was born in New Malden, Surrey, in 1948 to parents who were opera singers. He spent much of his childhood with a grandmother in Glasgow, where he attended Shawlands Academy.

By his mid-teens he was playing guitar in Scottish folk clubs, where he was helped considerably by the patronage of the singer and guitarist Hamish Imlach. By the time he was 18, he was playing professionally on the London folk club circuit and in 1967 he became the first signing in Chris Blackwell’s expansion of Island Records to become a fully independent label.

His debut album, London Conversation, appeared in 1968 and was a relatively restrained recitation of the solo acoustic set that he was performing in folk clubs at the time. By the end of the same year, however, it had been followed by The Tumbler, a far more adventurous recording that included the jazzy tones of Harold McNair’s flute and signposted what was to come.

Martyn’s unique style was developed further on his next two albums, Stormbringer and Road to Ruin, both of which appeared in 1970 and were credited jointly to Martyn and his wife, Beverley Kutner.

Recorded in Woodstock in upstate New York and brilliantly produced by the folk-rock pioneer Joe Boyd — whose other acts included Fairport Convention and Nick Drake — Stormbringer featured a host of top US session men, including the Band’s drummer, Levon Helm, and boasted a more expansive rock sound.

Road to Ruin pushed the folk-rock envelope even further and marked the first appearance of Martyn’s longest-lasting collaborator, the double bass player Danny Thompson of Pentangle.

When neither album sold particularly well, Island — just starting to taste big success with Cat Stevens — concluded that it would be easier to market Martyn as a solo singer-songwriter than as a duo, and Beverley was unceremoniously relegated to the background, making only occasional “guest” appearances as a backing singer while raising a family.

It might have been unfair but it marked the start of Martyn’s golden era. On Bless the Weather (1972) he combined a jazzy lilt with his folk-rock stylings, and on the track Glistening Glyndebourne he began to experiment with an echo unit that gave his guitar an extraordinary new sound, combining the warmth of an acoustic instrument with subtle layers of electronically enhanced complexity. Even better was to come with Solid Air in 1973. The title track, widely regarded as Martyn’s masterpiece, was a tribute to his doomed friend Nick Drake, while May You Never — later covered by Eric Clapton — remains among his finest compositions. But the sound was extraordinary, too, with Thompson’s rolling double bass lines augmented by members of Fairport Convention and Martyn using his voice not merely to convey his lyrics but as another instrument in the mix.

Inside Out appeared later that same year and moved even farther in the direction of experimental rock, with greater use of guitar effects and featuring Steve Winwood and Chris Wood from Traffic among the performers.

It was followed by Sunday Child (1975) which included a wonderfully elegiac version of the traditional ballad Spencer the Rover, as if to show he had not totally lost touch with his folk roots.

Blackwell then suggested that Martyn should spend time in Jamaica checking out the island’s music scene, and the result was One World (1977), a lush-sounding record that included a collaboration with the reggae producer Lee Scratch Perry on Big Muff. The record’s dubby, echoing soundscapes have since been claimed as the forerunner of the “trip-hop” style that emerged in the 1990s with bands such as Portishead.

By the end of the 1970s Martyn’s marriage was on the rocks, owing in part to his self-destructive drink and drug addictions and in part simply to the fact that he was barely ever at home.

Intense, autobiographical and cathartic, many of the songs on his next album, Grace and Danger (1980), dealt with the disintegration of the relationship. The record also featured Phil Collins who hung around to produce his next album, Glorious Fool (1981).

Collins’s involvement helped Martyn to his first Top 30 album, but its more mainstream sound did not find favour with his more longstanding fans. Thereafter, the flame of his once unique talent flickered more sporadically on albums such as Well Kept Secret (1982), Sapphire (1984) and Piece by Piece (1986). He later confessed that he could not even remember making some of them and by the end of the decade he found himself without a record label.

In the 1990s he went on to record for a variety of smaller labels and continued to tour. He often appeared in poor health and the worse for drink and cut a shambling, overweight figure unrecognisable from the handsome, curly-haired youth seen staring so hopefully out of his early album covers.

There were occasional flashes of the old spark on albums such as And (1996), Glasgow Walker (2000) and On the Cobbles (2004), but the record-buying public was more interested in reissues of his classic albums and retrospective box sets such as the aptly titled Ain’t No Saint (2008).

His health suffered further when in 2003 his right leg was amputated below the knee. This rather sad period of his life was documented in a BBC film.

His contribution to British music was recognised in 2008 when he received the lifetime achievement award at the BBC Radio 2 Folk awards and he was appointed OBE in the 2009 New Year Honours.

Martyn last toured in November 2008, when he performed his 1980 album Grace and Danger in its entirety.

He is survived by Beverley Martyn, and by their children.

| Paul Hillery
@bigmuffsite found this but didn't see it on your concert list https://t.co/NurVAf1AVs
10 months 2 weeks ago
END_OF_DOCUMENT_TOKEN_TO_BE_REPLACED