John Martyn, a Scottish singer and guitarist whose gentle mix of folk and jazz and innovative use of electronic effects have influenced a broad range of musicians since the 1970s, died on Thursday in Kilkenny, Ireland. He was 60. 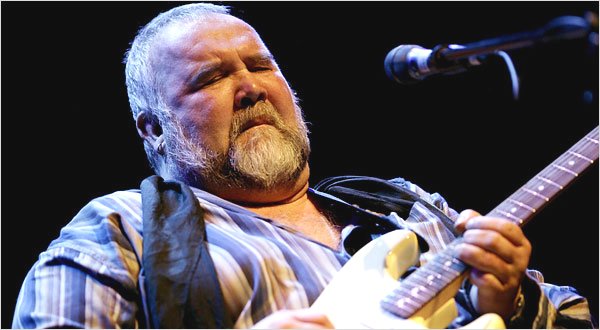 The cause was complications of pneumonia, said Jim Tullio, his longtime record producer.

Mr. Martyn emerged from the London folk scene of the mid-1960s with a crisp and distinctive guitar style, but he had his greatest impact in the ’70s with albums that took that sound in new directions. Inspired in part by the slow-burning, mystical jazz of the American saxophonist Pharoah Sanders, he devolved a keen sense of texture and atmospherics, transforming ballads into sensuous rhapsodies.

Making novel use of the Echoplex and other devices in songs like “Glistening Glyndebourne” (1971), he manipulated the sound of his acoustic guitar, making it pulse and throb hypnotically, an effect widely imitated throughout the ’70s and ’80s.

Although his music never had a wide appeal, Mr. Martyn released more than 20 albums and has been emulated by generations of musicians. David Gilmour of Pink Floyd and Phil Collins recorded with him, and Eric Clapton sang Mr. Martyn’s song “May You Never” on his 1977 album, “Slowhand.” Even Sade, the Nigerian-born queen of suave soft pop, has praised his breathy, romantic voice, which often slurred through improvisations.

Born Iain David McGeachy near London to parents who were light opera singers and who split when he was young, he was reared in Glasgow. He began playing guitar in his teens, influenced by Davy Graham, the patriarch of British folk guitar in the 1960s.

In London, he was persuaded by his agent to use a snappier name. Spotting a Martin guitar in the corner of the agent’s office, he altered one letter and dubbed himself John Martyn.
He signed with Island Records, and after two albums in a relatively straightforward folk style — “London Conversation” (1967) and “The Tumbler” (1968) — he married Beverley Kutner, a singer on whose album he had been hired to perform. In 1970 they released two joint albums, “Stormbringer!” and “The Road to Ruin,” on which Mr. Martyn began to develop his jazzy style.

In 1973 Mr. Martyn released two albums that many critics consider canonical achievements of progressive British folk: “Inside Out” and “Solid Air,” whose wistful title song is a tribute to Nick Drake, the gifted but troubled British singer who died of an overdose of antidepressants the next year.

Mr. Martyn struggled with alcoholism throughout his adulthood, and in 1977 he went to Jamaica for his health. There he collaborated with Lee (Scratch) Perry, one of the giants of reggae, releasing the reggae-tinged album “One World” that fall.

His marriage to Ms. Kutner ended in divorce, and “Grace and Danger,” which Mr. Martyn made in 1980, has, like Richard and Linda Thompson’s 1982 album “Shoot Out the Lights,” become a classic record of a relationship’s painful end.

Since an injury in 2003 that led to the amputation of his right leg below the knee, Mr. Martyn had largely been unable to tour, despite encouragement from musicians like Beck and Devendra Banhart. But in October he played at Joe’s Pub in Manhattan with a longtime collaborator, the bassist Danny Thompson, in a performance that Jon Pareles of The New York Times called “brief yet heartening.”

Mr. Tullio, his producer, said that Mr. Martyn had lately been energized by a series of accolades. Last February he received a lifetime achievement award, presented by Mr. Collins, at the BBC Radio 2 Folk Awards. Last month he was named an officer of the Order of the British Empire.

But he was most excited about a recording project he had just begun, Mr. Tullio said: an album with his hero, Pharoah Sanders.

| Paul Hillery
@bigmuffsite found this but didn't see it on your concert list https://t.co/NurVAf1AVs
10 months 2 weeks ago
END_OF_DOCUMENT_TOKEN_TO_BE_REPLACED