By now most of you will be aware of the death of singer songwriter guitar stylist musician John Martyn. By virtue of his huge talent and colourful and sometimes reckless lifestyle his passing was noticed and commented upon by nearly all of the popular media.

I would just like to add my personal comments because John was very much a contemporary of mine and I admired his music immensely. 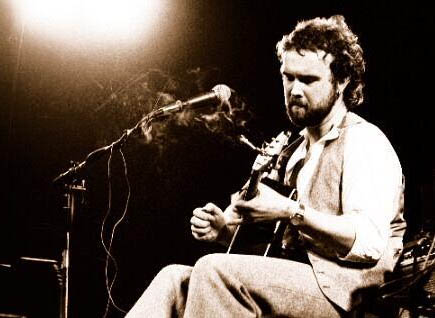 We first met down at the legendary Soho club "Les Cousins" in Greek Street about 1968. John was about nineteen and I was 23. His cherubic boyish looks and light hearted demeanour made him a favourite with the girls and the envy of the boys who wanted to have his confidence, to say nothing of being able to play like him. John had arrived from Scotland where he had been mentored by Hamish Imlach who rightly is regarded as the grandfather of the Scottish folk blues scene. To this day people like Billy Connolly still talk of Hamish with reverence and John was no exception. John's sound was very nearly formed from the earliest days and it was a truly fantastic technique. His style enabled him to keep up a steady rhythm with his thumb on dampened bass strings whilst whizzing about all over the neck in a finger style that was amazing. In the early days he played a £ 45.00 Yamaha Fg and practically wore through the front. He later got a dentist friend to build up his thumbnail with some sort of dental fibre glass so that he did not need a thumb pick to achieve the drum like beat to his playing. Nearly all his early tunes were foot tapping and often disguised sensitive lyrics and a thoughtful side to his writing.

I think it would be helpful to see John’s drinking and drug taking as something that crept up on him. "Doon", the house barman at the "Cousins" remembers John consuming quite alarming amounts of vodka before a performance and this, I now realise, was to ease the nerves that John experienced before taking the stage. Looking back there are clears signs of nervousness in the few live film clips of him but John’s best defence against nervousness was attack and usually with light self deprecating humour. Sadly this approach sometimes became more aggressive as time passed. It is so easy for drink or other chemicals to develop into a habit you don’t know you have.

As John’s musical abilities grew the de-inhibitor that he had become dependent upon allowed him to push his vocals further and further out until part of John’s whole appeal for the audience was to see how far he would go and to what depths of emotion he would reach as he explored his greatest songs.

John's fantastic partnership with the bassist Danny Thompson was one of the most thrilling musical pairings of the seventies and eighties. Danny is a monster musician and has a huge impact on all who work with him. Danny’s passion for music and thoughtful but driving rhythmic bass accompaniment was perfect for John's riffy accompanying with it's strong nod towards jazz stylings. Slowly John absorbed Danny’s mannerisms and accent as they became more and more telepathic in their musical understanding. John’s accent would freely vacillate between Danny's Cockney and street savvy Glaswegian depending upon what emphasis seemed to be needed. These gigs are most memorably captured in the Live at Leeds album.

John’s life became increasingly complex and the way he dealt with it did not make it any easier for himself. He poured out his heart through the music at this time and even when his speech was slurred and the voice wracked with emotion there was always something to be gained from his performances. I recently took part in a TV documentary about John1 and I mentioned my feeling that there was a deep hurt in John somewhere. Paradoxically there was always a bit of boyish mischief not far below the surface too and often a great deal of aggression. Danny Thompson often remarks that after John had once dealt with four drunk guys single "headedly" in some late night Indian restaurant; he probably went home and wrote the line to his lover… "curl your arms around me like a fern in the spring…" John was certainly more than one person.

Johns own favourite musician was not a guitar player although he too acknowledged one of my favourites, Davy Graham, as a huge influence. John's professed hero was a saxophone player called Pharoah Saunders. Sometimes I felt that John used his voice like an instrument and in particular the sax. After repeating the key phrase he would extemporise like a horn player trying to extract the emotion from the song that mere words and tune could not. These concerts were not always comfortable. John's shows could be raw, demanding, dangerous and uneven, but I always thought of them as art.

John never learned to read music though he was hugely admired by some of our greatest. On the one occasion we recorded together, Danny Thomson was with us.
"It's in E minor" I helpfully offered.
John just looked at me and grinned.
"He don’t read music Ralph, just play him the chord," said Danny. I played an E minor chord for John who tuned his guitar to some strange sequence of notes and he played his remarkable Echoplex style on "River Rising Moon High".2

John's misfortunes have been extensively documented in the last few weeks so suffice to say I kept in the loop through his and my friend Danny Thompson. Most recently I saw an interview with Phil Cunningham where all of the above comments about John's work were crystallised in a heartbreaking performance of [Hurt In Your Heart] and even then as John wipes away tears there's that hint of mischief as he metaphorically arrives back in the studio and the real world.
Check this out. [the video fragment at the bottom of this page, ed.]

I have many memories of John and several favourite albums "Solid Air" and "Grace and Danger" would be uppermost; like any artist, there are times when John did not carry all of us with him when he went off on his journey. When you think about what elements music should contain: Tension; release; poetry; melody; swing; some danger perhaps; harmony; soul; instrumental ability and emotional depth it is truly hard for me to name someone who ticked as many boxes as John did.

John we are going to miss you terribly.

| Paul Hillery
@bigmuffsite found this but didn't see it on your concert list https://t.co/NurVAf1AVs
10 months 2 weeks ago
END_OF_DOCUMENT_TOKEN_TO_BE_REPLACED