Hundreds of mourners flocked to the small town of Kells in County Kilkenny at the weekend to attend the funeral of world-renowned folk musician John Martyn.

John who had been living in Thomastown with his partner Theresa, died on Thursday last week. 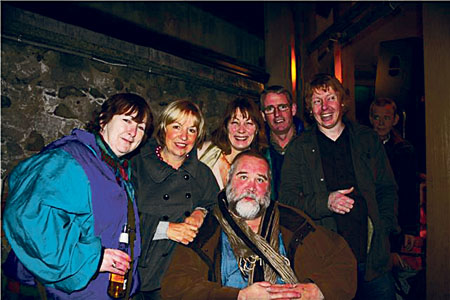 One of his last appearances in Kilkenny was at Kilkenny’s Rockfall Festival where he made an appearance in Kytelers on Kieran Street last year. Eamonn Cleere told the Kilkenny Advertiser that John agreed to play for the final night gig of the festival.

"He came in and played from his wheelchair. He gave a great performance1. He had a huge following in Kilkenny and was living in Thomastown for years with his partner Theresa. We were delighted that he came into the Rockfall Festival. He sang two songs and then he went off again. It was great. He will be missed from the music scene."

John was cremated following an informal ceremony at St Mary’s Church in Kells on Sunday where friends and family of the larger than life singer remembered John.

"There were many tributes paid to John from the altar and the congregation laughed at some of the memories that people recounted. Although it was a sad occasion, people were able to smile about him and remember the good things."

Most of the music played throughout the ceremony was John’s own while Mary Moore sang The Sally Gardens. The small church was packed to capacity as the congregation paid their last respects.

| Paul Hillery
@bigmuffsite found this but didn't see it on your concert list https://t.co/NurVAf1AVs
10 months 3 weeks ago
END_OF_DOCUMENT_TOKEN_TO_BE_REPLACED