HOLLYWOOD - Five new albums from Island Records are scheduled for release on Oct. 15, supported by a comprehensive merchandising and program. LPs by Traffic (On The Road), John Martyn (Inside Out), Spooky Tooth (Witness), The Wailers (Burning) and Amazing Blondel (Blondel) have been set for Island, distributed by Capitol.

The Island month campaign planning began in July, when Capitol merchandising director Dennis Killeen went to London to meet with the Island people and discuss support concepts. At that time, the 'Island People' theme was set, to be used in all advertising and display material. The campaign was coordinated in the United States with the help of Island people Annie McCormack and Walt Schaeffer.

A series of mounted and soft poster sets carries the 'Island People' motif and features Bob Marley of the Wailers, Steve Winwood of Traffic, John Martyn, the Amazing Blondel and Spooky Tooth. Added to the campaign have been the Sutherland Brothers and Quiver, whose recent tour and chart single have brought them Stateside attention, and Stomu Yamash'ta and the Red Buddha Theatre, whose Man From the East theatre piece and album premiered in the U.S. simultaneously in September. In addition to the poster series, display material includes a cardboard floor merchandiser, holding 200 albums, that picks up the 'Island People' graphic theme as does a set of varicolored plastic divider cards featuring each group.

Killeen has also put together an 'Island People' sampler LP, featuring cuts from all seven albums and designed for in-store play.

An extensive trade and consumer print campaign, designed by Capitol art director Roy Kohara, has been created, as well as a widespread broadcast (radio and TV) campaign that will begin on the Oct. 15 release date.

All artists included, with the exception of Traffic, will be touring in the United States between now and Christmas. Through Stu Yam's artist relations department, individual market campaigns will be conducted, following the tour schedules.

sitenotes:
This article was printed in Cash Box of 6 October 1973. The Island People (Jook Joint) sampler was one of the results of this campaign. Capitol also placed a two page advert in Cash Box two weeks later: 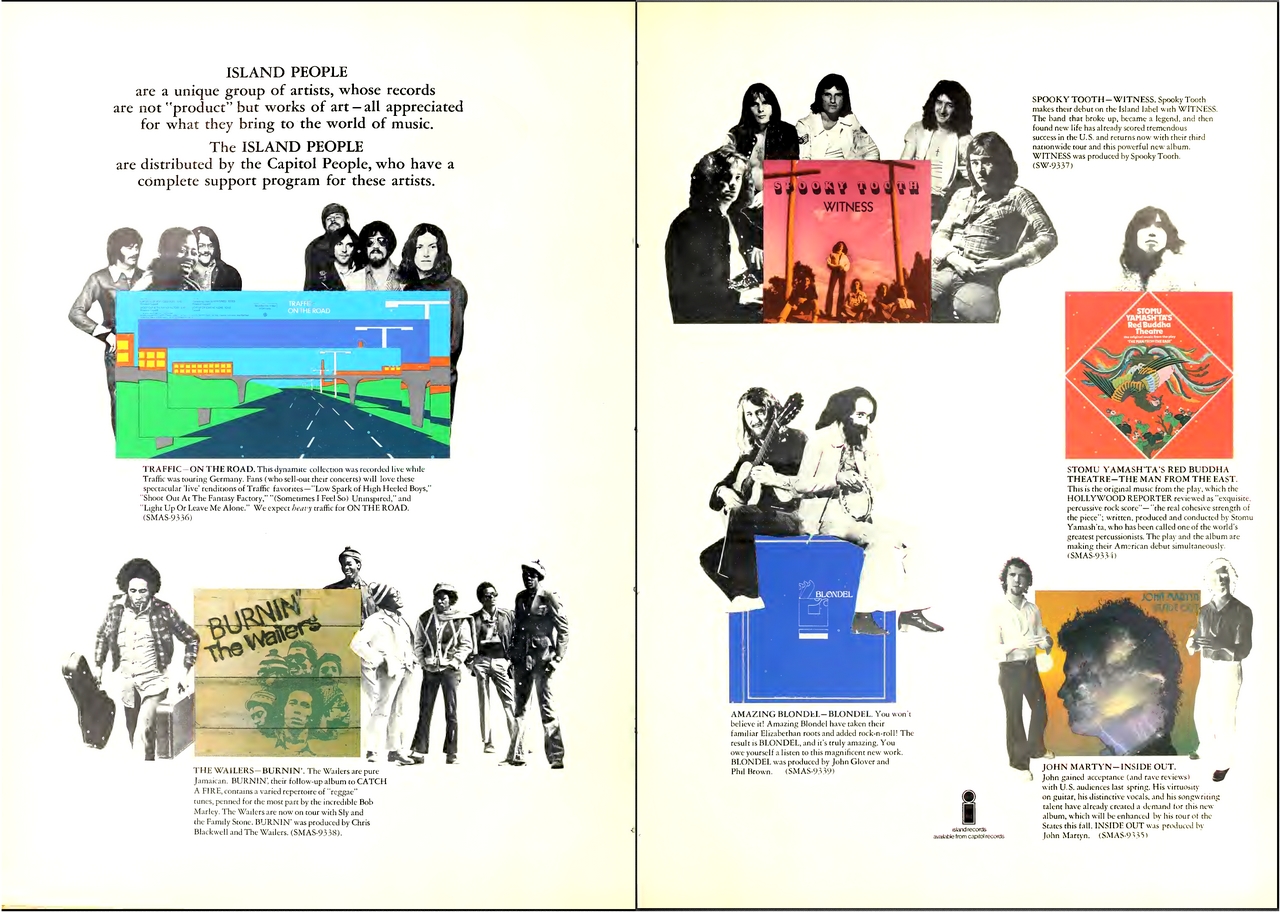 Related to:
Island People (Jook Joint)
Inside Out

| Paul Hillery
@bigmuffsite found this but didn't see it on your concert list https://t.co/NurVAf1AVs
10 months 2 weeks ago
END_OF_DOCUMENT_TOKEN_TO_BE_REPLACED