An inventor who doesn't stand still 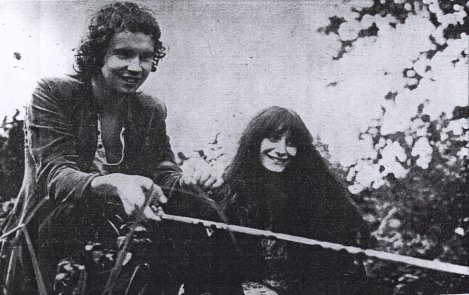 • John and Beverley Martyn
IT WAS 2 p.m. when John Martyn roused himself - an hour after our intended rendezvous in Notting Hill.
By
Jerry Gilbert

When we eventually met in Regent Street later that afternoon, I found John to be as elated and as ebullient as ever about the release of his new album Bless The Weather.

London Conversation, The Tumbler, Stormbringer, The Road To Ruin and now Bless The Weather - five Island albums which trace John's progression from the raw teenager learning how to write songs, to the mature family man whose songwriting and guitar playing are still streets ahead of this contemporaries.

Stormbringer was undoubtedly the turning point, and it was an album that John and his wife Beverley recorded in America, with American producer Joe Boyd and an American session team that included Paul Harris, Levon Helm and Billy Mundi. But with his latest album John has proved that he can not only manage without Joe Boyd, but he can also bring the best out of British session musicians.

"I think I'm definitely going to make a record with a band - just a blowing band, but it's really a question of who to get," John explained. "I mean I've got all the guys in my head but it's just a matter of approaching them."

The release of his new album has been greatly delayed - in fact the sleeve was on display for his Queen Elizabeth Hall concert way back.1 "But the whole album has been the easiest thing I've ever done - it was just a joy to make. It was made a while ago, in fact I played it to Paul Harris at the time when he came over to work with Steve Stills."2

If a band is formed, it is sure to include John's wife Beverley, for although she only appears briefly on the new album, she will be recording a solo album at some point.

The prospect of a band seems foremost in John's mind at present. "If I could find two more people we really could get a nice band together. I've been looking for two years now, and I'm still keen to work with brass - in fact I'm trying to play sax but I'll delay that until I feel competent enough. I want it to be primarily a songwriter's band," John added.

I asked him whether he missed Joe Boyd's production talents. "Well I'm not doing an injustice to Joe but John Wood was a gas to work with - he really was incredible and knew just where to draw the line without letting me go too far."

"I've found I've been writing more since I moved down to Hastings than when I was in the city because there have been more things happening in my head; I really think I'm only just beginning to get over living in London."

Aside from being one of the funkiest acoustic guitarists around, John has been experimenting a good deal electrically by employing various gadgets and devices. The solo on Road To Ruin is a perfect example of inventive, single string playing using wah wah and sustaining devices to create a hypnotic effect. On the new album he makes a similar statement on a superb track called Glistening Glyndebourne.

"But," says John, "I don't think that what I'm trying to say with electric guitar is within the listening capacity of what the average person expects - I mean I've just noticed it as a fact. What I want to do is turn acoustic freaks onto electric and vice versa because I really do get a buzz out of both."

As a guitarist and a composer John Martyn is probably before his time, and in due course he will undoubtedly be recognised as an inventor. At the same time he is aware of the temptation of standing still and he has no intentions of curbing his own natural progress. "Each time I'm tempted to slow down I think what's the point because I've heard so many albums in which the people from their first to their nineteenth albums are exploiting one little riff or something without attempting to broaden out."

I mentioned John's very rhythmic approach to the music and he confessed, whether seriously or not, that he preferred to play drums these days. The conversation returned to his ideas of a band. "The thing is I shan't have to think about playing bass, rhythm and lead any more."

It is, therefore, obvious which way John must turn next.

sitenotes:
1 Not quite clear what concert is being referred to. The author seems to think of 21 February 1970 but it's more likely John was talking about the QEH show of 10 September 1971, with Sandy Denny and Duncan Browne.
2 This is somewhat puzzling as the London recordings for Stephen Stills' first solo album mostly took place in the first half of 1970.
This interview was published in Sounds of 11th December 1971. Material provided by John Neil Munro.
Related to:
Bless The Weather

| James Barry
@OneWorldJM Hi, I was sure I remembered seeing JM at the Theatre Royal, Bath but could find no date in the concerts… https://t.co/Vo0ewtPGFj
3 months 20 hours ago

| One World
Small change in name of the website again https://t.co/UVWX5NLsIy
3 months 1 day ago

| One World
Heads up | Summer Gathering https://t.co/oNFUjz01Ha
3 months 4 weeks ago

| One World
Decided to change the name of the website.. https://t.co/wScakX3uX5
4 months 2 weeks ago

| Paul Hillery
@bigmuffsite found this but didn't see it on your concert list https://t.co/NurVAf1AVs
5 months 6 days ago
END_OF_DOCUMENT_TOKEN_TO_BE_REPLACED