Do you really own a first vinyl pressing?

Here you can find the record labels Island used for John's UK releases. This info can prove useful as some traders have a tendency to put a near mint (= newer) release in a nice looking original sleeve with lyric sheet.

The white labels used on both releases of Live at Leeds are left out since they were 'independent'. Also there was no use for the Antille's labels from Canada, the German pink labels with a black 'i', the Australian Island or the black Island labels from France since these were all licensed releases.

Island was founded in 1962 by Chris Blackwell although some sources say it was 1959. The label was named after a 1956 novel Island In The Sun by Alec Waugh (Evelyn Waugh's elder brother). In the beginning it produced mainly reggae releases. Halfway 1967 the label adopted progressive rock which coincided with the introduction of the famous pink labels. All mono releases were on the first pink label but it does not work the other way round.

From this table it becomes clear that the albums changed face faster than the singles.

There have been more rereleases: of Bless The Weather and Solid Air on the blue rim label (so mid 70's), and of The Tumbler, The Road To Ruin and Inside Out on the blue label (probably mid 80's), but it is difficult to pinpoint their release dates.

The third pink label lasted longer in Australia, it was used as late as 1973.

The album labels are of course originally copyright of Island Records and reproduced here by kind permission of Ian & Stephanie Rennie, makers of an impressive and informative Fairport Convention website and also owners of the former Musikfolk webstore. Their info was largely based on a Record Collector story.

Simply Vinyl records rereleased two JM albums on audiophile 180 grams high quality vinyl: Solid Air and Grace & Danger. They used this pink Island label which is nice but not quite accurate as the pink labels stopped in 1970 and the rereleases were made 1999 and 2000, the original albums originating from 1973 and 1980 respectively. On the other hand this is a good way to identify genuine HQ pressings. 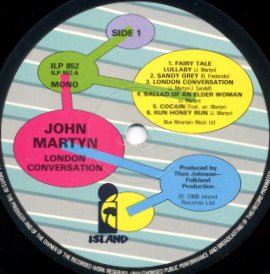 Meanwhile Rob Caldwell gets the honour of tracking down the strangest label for London Conversation. This layout was in fact used very rarely in 1980 by Island, also for a UK release of Grace & Danger, and I also saw a reissue of So Far So Good with it. But this scan comes from a mono (!) rerelease in Italy with an additional catalogue number Orizzonte ORL 8373 on the sleeve. My own Italian copy has the same catalogue number but a blue day/night label. 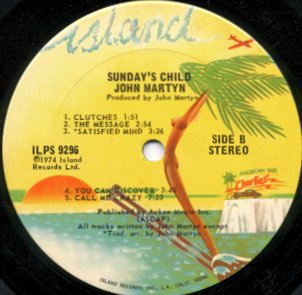 And while we're at it, how about this US holiday card? Almost Baywatch avant la lettre...

| One World
Heads up | Summer Gathering https://t.co/oNFUjz01Ha
2 months 2 weeks ago

| One World
Decided to change the name of the website.. https://t.co/wScakX3uX5
3 months 6 days ago

| Paul Hillery
@bigmuffsite found this but didn't see it on your concert list https://t.co/NurVAf1AVs
3 months 3 weeks ago
END_OF_DOCUMENT_TOKEN_TO_BE_REPLACED