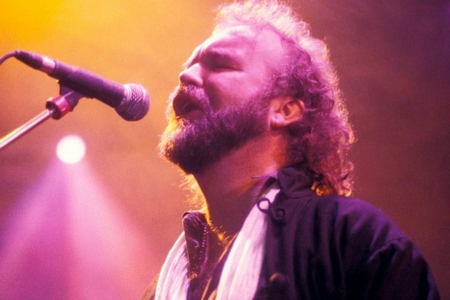 It’s always rather reassuring to find new evidence that rock stars are just like the rest of us. So it’s comforting to know that Robert Smith, leader of the Cure, when charged with creating a cover version of the John Martyn song Small Hours for a new tribute album, headed straight for his laptop, not to fire up some impossibly state-of-the-art recording software, but to sit in front of YouTube, watching videos of Martyn performing the song himself, to try and work out exactly how to play it — just like someone who hadn’t sold 30m albums might do.

The highly individual style of Martyn's music is one of the factors that has endeared him to several generations of his peers, making him the ultimate musician's musician, and explaining the starrier-than-usual turnout for Johnny Boy Would Love This, a new tribute album to the man who died in January 2009. Among the musicians reinterpreting his work on the album, which is released on August 15, are Beck, Snow Patrol, David Gray, Vetiver, the Swell Season, Beth Orton, Lisa Hannigan, Vashti Bunyan, Paolo Nutini and Martyn's old mate Phil Collins, as well as Smith.

This line-up also reflects the decision of the album's co-ordinator, Jim Tullio, to eschew Martyn's contemporaries in favour of the generations of musicians who followed and who first discovered the man's music as fans.

To many casual music fans much of Martyn's career may have passed under the radar –except perhaps for the songs Sweet Little Mystery and May You Never- but he's one of those figures whose work touches something deep within fellow musicians. Smith remembers first hearing Martyn's music played by John Peel on Radio 1 back in 1977. "I used to tape Peel's show, like everyone did back then," Smith says. "Listening back the next day, I played Martyn's song One World over and over. I saved up and bought the vinyl. And I still love it."

Coincidentally, the call asking if he'd like to contribute to Johnny Boy Would Love This came just as his record company had sent him a new edition of the One World album. "They were planning a set of de luxe reissues of the Cure, and to convince me that this was a good idea they sent the de luxe edition of One World, to show how well it was done. It was a good choice: they'd never have persuaded me if they'd sent over a box set of the Eagles," Smith jokes.

Beth Orton also remembers her teenage discovery of Martyn's music. "It just changed your whole idea of what music should be," she says. "The first time I heard Martyn's Solid Air was like the first time I heard Joni Mitchell's Blue. Albums like that just open up a new world for you. That whole teenage period of my life I'll always associate with John Martyn – not that I've ever grown out of him."

Orton's only problem when she was asked to perform a Martyn cover for the tribute album was deciding which one. "There are so many I love," she says. "I ended driving around singing them all to myself. When I got to Go Down Easy, I thought, 'Hang on, I really like what I do with my voice on this one' – so that was it."

Martyn's highly distinctive style does set a problem for anyone trying to cover his songs. As with Dylan, his phrasing is so much a part of the songs that it can be hard to find your own way of singing them. And even when you do, you face a further quandary. As Smith puts it, "You've chosen the song because you love it. You want to do something different, but the more you change it, the more you start not to like it any more."

"Essentially, the further I moved away from the original, the less good it got. I tried slowing it down, but it sounded lethargic. I tried speeding it up, but it sounded coy. Eventually, you arrive at the conclusion that his way of doing it was best. Also, you start to think of all the other people who must feel as strongly as I do about the song – about how dismayed they would be if I tore it apart."

Tullio produced several of Martyn's albums, and became a close friend. Asked to describe Martyn, he cites the movie Amadeus. "If you watch that movie, you're not just watching Mozart, you're also watching John Martyn. The talent, the giddiness, the devil-may-care attitude. It's the same guy."

That's the glass-half-full version of Martyn; the glass-half-empty version is a man whose heavy drinking made him extremely difficult to be around. Glen Hansard of the Swell Season recalls being in the next Portakabin to Martyn backstage at a festival. "He couldn't have been sweeter to me," he says. "Then he went on stage and was angry with everyone and everything. He delivered an amazing set, though. Then came back to his Portakabin and drank, and drank, and screamed and screamed. It made me sad that he was so angry. I just thought, 'Surely it’s not worth it – just give up the music and go and be happy instead."

Cheryl Wilson, who sings You Can Discover on the album, doesn't think Martyn had that choice. Wilson, who sang back-up vocals on many of Martyn's albums1, says: "John really lived his art. Most people can't do that, because it's too difficult to do that and live a normal life. But he always had to stay as close as possible to the creative edge. It was a gift, and he respected that gift, and it was the only way he could live. So, as a musician he was completely fluent, but as for negotiating his way through the rest of the day – that was difficult."

Martyn's total commitment to his art is another reason why so many musicians idolise him, and it also answers one sweet little mystery about Johnny Boy Would Love This: why is Sweet Little Mystery not on it? In fact Devendra Banhart -a keen Martyn fan who helped recruit Beck, Vetiver and others to the project- chose this song for himself. But, despite four separate attempts to record it, he never managed a version he thought was good enough. With many tribute albums you can tell that artists have simply stormed though a song in one take at the tag-end of a recording session. But clearly that wasn't appropriate here. Other artists treat Martyn's music with the same respect he showed. If they didn't think their version met his high standards, they wouldn't send it in. This explains why Johnny Boy Would Love This isn't just a fitting tribute to a great talent, it's also a truly excellent album.

sitenotes:
1 I found No Little Boy, and Heaven And Earth.
The article was published with a picture of John from the And period, unfortunately with left and right switched.

| Paul Hillery
@bigmuffsite found this but didn't see it on your concert list https://t.co/NurVAf1AVs
10 months 2 weeks ago
END_OF_DOCUMENT_TOKEN_TO_BE_REPLACED