Gig of the weekend

THE Guide to what's on

GIG of the weekend

The line-up for this one-day event in the spacious Green Glens Arena has something for nearly everybody, from full-blooded celtic soul brothers Van Morrison and Shane MacGowan to the glittery contemporary pop of The Corrs and the camp shenanigans of Bono's buddy Gavin Friday.

Rabble-rousers The Saw Doctors are also in there somewhere, as are Canada's The Cowboy Junkies, country queen Emmylou Harris, squeezebox ace Sharon Shannon and the legendary John Martyn, a man known to equal Van in the getting out of the wrong side of the bed of a morning stakes.

The action will take place over three separate stages - the Greenfield, the World and the Examiner Stage, with some 30 acts performing.

Organisers say if the gig is a major success they will turn it into an annual event. 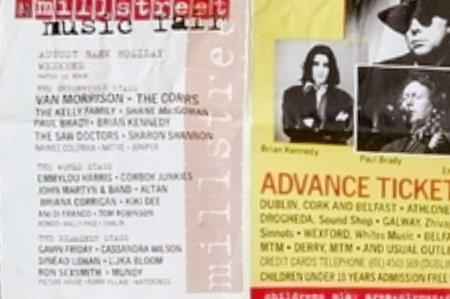 | One World
Small change in name of the website again https://t.co/UVWX5NLsIy
1 week 3 days ago

| Paul Hillery
@bigmuffsite found this but didn't see it on your concert list https://t.co/NurVAf1AVs
2 months 2 weeks ago
END_OF_DOCUMENT_TOKEN_TO_BE_REPLACED