FROM 1967, ISLAND WAS AT THE CENTRE OF THE PROGRESSIVE ROCK MOVEMENT. IN THE FIRST PART OF A SERIES, STUART PENNEY & CHRIS SAVAGE RELIVE THE CLASSIC PINK LABEL YEARS, WHICH INTRODUCED THE WORLD TO JETHRO TULL, FREE AND KING CRIMSON.

In the mid-60&, Island Records supremo Chris Blackwell began to expand the label's roster to include a handful of white British artists whose work he, and mercurial producer/ A&R man Guy Stevens, particularly admired. As Island was originally formed solely to market and distribute Jamaican records in Britain, the label's output had, not surprisingly, been almost exclusively of West Indian origin.

But as early as 1964, Blackwell had discovered and signed Birmingham white boys the Spencer Davis Group. Their releases were initially licensed to the decidedly more pop-oriented Philips, via their Fontana offshoot - where, conveniently, Chris was also working at the time. Other Island signings involved in the Fontana deal included Wilfred 'Jackie' Edwards (a West Indian songwriter of some renown who actually penned -and guested on- a couple of those early SDG singles), Alex Harvey and Millie (Small), whose 1964 novelty hit 'My Boy Lollipop' became the first UK No. 1 (on some charts) for a Jamaican artist.

Rock historians often tell us that John Martyn was the first white act to sign directly with Island; in fact, the sleeve-notes to his 1977 compilation LP 'So Far So Good' (ILPS 9484) even claim that he joined the company as early as 1965. Martyn did enjoy a long and illustrious relationship with Island, but he certainly wasn't the first white artist to appear on the label. Even if we ignore the strictly jazz-based LP "Affectionate Fink" (ILP 926, 1965) by the unquestionably Caucasian (but strangely mis-spelled) Harold 'MacNair', there were still other white folk (the V.I.P.s, Chords Five, Freaks Of Nature, etc.) recording for Island before Martyn.

Strictly speaking, the first white British artist to appear on the label, and the man who can claim, however modestly, to have started the entire prog rock ball rolling at Island, was one Wynder K. Frogg, whose "Sunshine Superfrog" album (ILP 944) emerged in mid-1967.

Frogg (the second 'g' was, apparently, optional and had been dropped by the time of his second album) was actually Mick Weaver (not to be confused with Mick 'Blue' Weaver), a journeyman keyboard player who later tickled the ivories for everyone from Dave Gilmour and Juicy Lucy to, more recently, Buddy Guy. Consisting mainly of low-key instrumental cover versions, 'Sunshine Superfrog' was hardly a classic (though it's enjoyed an Easy renaissance in recent months), but as the record that began to lead the label away from its West Indian roots into the burgeoning U.K. blues, folk and hard rock market, every self-respecting Island collector should seek out a copy.

Following Wynder K's inauspicious debut (and moving swiftly along past a less-than-essential release from MOR folkies the Settlers, the arrival of the first pink label offerings by John Martyn and Traffic in late 1967 hinted that something big was brewing down in Basing Street. Throughout 1968 and into 1969, the Island roster quickly mushroomed, with Jethro Tull, Free, Fairport Convention, King Crimson, Blodwyn Pig and a host of others turning out high-quality albums almost weekly in an atmosphere of friendly rivalry. In fact, it's fair to say that by 1970 Chris Blackwell had assembled a stable of talent worthy of any label in the country, with scarcely a duff album among them.

Naturally, the other major labels weren't slow to climb aboard the new fangled underground bandwagon. But in order to compete with the fiercely independent Island, the multi-nationals presumably felt they had to establish their own, strictly non-corporate, identities. So EMI launched the impossibly cool Harvest imprint, complete with Roger Dean label design; stuffy old Decca came up with the eclectic, if short-lived, Nova subsidiary, before drastically revamping their existing Deram offshoot (originally launched in 1966 as a curiously bland MOR/jazz/pop label, but soon a major player in the prog scene); while Philips, of course, gave us the mighty Vertigo label which, thanks to an (initially) strong roster and some eyecatching sleeve designs, quickly became the bastion of progressive rock. A myriad of labels came and went (Dawn, Dandelion and Neon, to name but a few), but the Big Four of Island, Harvest, Deram and Vertigo would establish a virtual stranglehold on all that was good, bad and/or indifferent in British prog rock for years to come.

While many of these new labels produced their share of memorable records (at least in the early years), it's probably true to say that few, if any, of them could compete with Island's remarkable tally of classic albums. No doubt about it, between 1967 and 1972, in the progressive rock, blues and folk stakes, it was game, set and match to Chris Blackwell and his team.

For collectors, this halcyon era is synonymous with the famous pink Island label design - which begs the questions of how many pink label albums were issued, which of them are worth collecting and how can you tell the various pressings apart.

The first and second parts of that question an actually quite easy to answer: between October 1967 and November 1970, there were some 56 pink label rock releases, including compilations, samplers and related Chrysalis LPs (but excluding reggae and other black music albums, which are outside the scope of this feature, but are included in the accompanying discography).

This confusion appears to stem from the fact that very few dealers or discographies ever seem to acknowledge that, between 1967 and 1970, Island used three distinctly different, and clearly identifiable, pink label designs. The first, which was in use from late 1967 until mid-1969, featured the word 'island' in large, lower-case lettering along the bottom of the label with a distinctive orange and black circular logo dotting the 'i'.

The second version, sometimes known (for obvious reasons) as the 'black block' label, was a short-lived affair which went into service around September 1969, only to be discontinued a few months later. This design used the same circular logo (now in black), dotting a large, stylized lower-case black 'i' which was set beneath the spindle hole. It should be noted, that besides the handful of releases which debuted on this second label, a few (but by no means all) big-selling early albums were also re-pressed with this design, although they tend to be much harder to find than original, first variation, issues.

The third and final pink design, and the one which is by far the most common variation today, featured a large, lower-case white 'i' beneath the spindle hole, with the words 'Island Records Stereo' written around the perimeter of the label. In circulation from late 1969 and virtually throughout 1970, this label was used on all but a handful of the 56 pink rock albums - either as first pressings or as re-pressings of earlier releases.

As the new decade began, so the pink label era inevitably came to an end. In late 1970, Island introduced what has become known, variously, as the 'white-based palm tree', 'pink rim' or (even) 'sun-ray' label design. Although it will probably never inspire quite the degree of misty-eyed reverence among collectors as its pink-hued predecessors, the 'palm tree' label (as we shall call it here) graced many fine albums during its five-year existence. 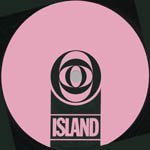 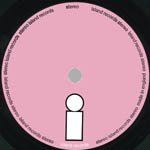 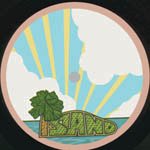 The 3rd and most common pink label design, with its large lower-case 'i'. The pink labels finally gave way to this 'palm tree' or 'pink rim' design.

This series concentrates firmly on the rock-related albums issued with pink labels, but we've extended the barriers at both ends, to encompass both Mr Frogg's pioneering debut, and LPs by the Alan Bown and Nick Drake, which fell squarely within the 'pink' time-frame, but almost certainly never appeared on the pink label (at least, not in the U.K). Those pink albums which were later re-pressed on the palm tree label are also noted here - as are the few green label Chrysalis releases which have pink Island label affiliations. Subsequent pressings on the later 'orange palm tree', 'day/night' (or 'blue palm tree') and 'coloured balls' label designs (and beyond) are only of minimal interest to collectors.

Using the album-by-album guide which begins below, you can quickly establish exactly which label relates to which release. If you refer to the illustrations, you can identify and date the 56 albums simply and accurately.

Of course, there was inevitably some overlap during the changeover from one label design to another, which can throw a chronological spanner in the works when trying to establish a precise pattern within the three pink label designs.

Finally, a few words about the 'Known Label Variations' for each release. In the interest of accuracy, this section includes only albums which have been seen by the authors. Naturally, any additions, corrections and clarifications (U.K. pressings only) will be welcomed. Unless stated otherwise, all catalogue numbers used refer to Island releases.

It may not have been Island's first pink label album, but for students of their folk/prog era, this is where it all began. Martyn's landmark debut fell somewhere between the knuckle-busting virtuosity of folk guitarist Davey Graham and the blissed-out, melodic whimsy of Donovan. While it sounds a trifle under-produced to modern ears, it remains a eminently listenable affair, with barely a hint of the slurred magnificence which would overtake the big man's vocals in later years.

For all its low-budget simplicity (it allegedly cost a scandalous £ 158 to record) and painfully dated sleeve-notes, the staunchly acoustic London Conversation has retained much of its original naive charm. Fittingly, despite an occasional brief absence from the catalogue, it has never officially been deleted. With a mid-price CD now available, this is one of Island's most enduring releases - 29 years and still going strong! 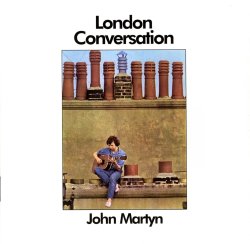 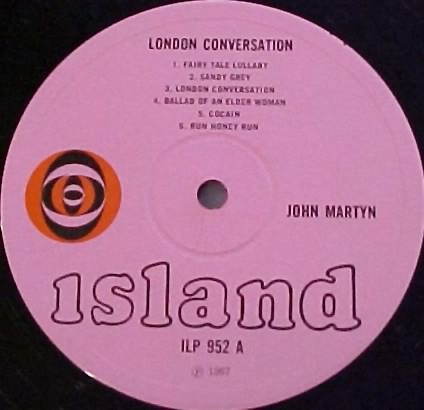 Caption:
John Martyn, one of the earliest (but not the first) white artists on Island.

sitenote:
There were many more of these short characterisations of famous early Island released but we only reproduce the relevant ones for this site.

With Al Stewart in the producer's chair, John Martyn's second LP was, predictably, another largely acoustic offering firmly rooted in the late 60s British folk blues tradition. This time, however, Martyn's rapidly maturing songwriting skills, together with some solid contributions from the doughty Harold McNair on flute, resulted in an altogether more satisfying album.

True, the 'Knuckledy Crunch And Slippledee-Slee Song' was as buttock-clenchingly twee as its name suggests and, even by 1968 standards, second guitarist Paul Wheeler's E.J. Thribb-rivalling sleeve poem pushed the cringe-o-meter right off the dial. Elsewhere though, the embarrassments were far fewer than might be expected. 'Dusty', 'The River', 'Sing A Song Of Summer' and 'Fly On Home', for example, have all aged rather gracefully, while the backwards guitar on 'Hello Train' hinted at bigger things to come. 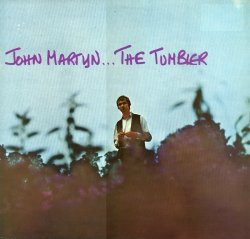 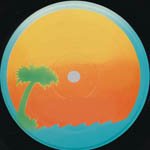 14. SING A SONG OF SUMMER - JOHN MARTYN
Twee? Granted. Childlike? But of course. Throwaway? If you insist. Unlistenable? Never! Good singing, good playing from Martyn on this delightful little ditty from "The Tumbler". Ebullient.

The first article concluded with the following discography reproduced here for collector's interest:

| Elliott Franks
John Martyn live at The Anvil in Basingstoke on the 27th April 2004 mad to think this was 16 years ago… https://t.co/fmbKEx3uCY
2 days 7 hours ago