Singer, guitarist and composer John Martyn was a folkie with a jazz soul. An accomplished and innovative guitarist, he got his start as a teenager in Britain's thriving folk scene of the 1960s. He went on to add electronics, collaborate with Phil Collins and score a hit with the British dance band Sister Bliss. Pink Floyd's David Gilmour was a fan. Beth Orton was one of many who recorded his songs. 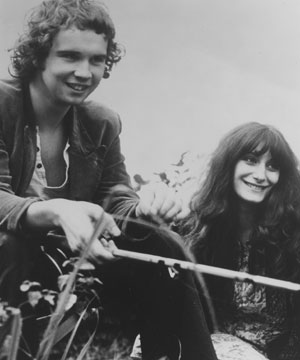 Martyn died Thursday morning at a hospital in Ireland. The cause was not disclosed, but he'd struggled with alcoholism for much of his adult life. He was 60.

Martyn was about 21, with three acclaimed albums already released by Island Records, when he heard a sound he'd never heard before — it was the sound of Pharoah Sanders' saxophone, specifically on the album Karma with vocalist Leon Thomas. Martyn told Mojo magazine in 2000, "It was like a bolt of lightning. I'd never heard someone play so emotionally... with that sense of humanity."

Up until then, Martyn was immersed in folk and blues. His intricate, finger-picked guitar playing — especially the way he slapped the strings — became widely imitated. But after hearing Sanders, Martyn decided to add an electronic device called an Echoplex to his acoustic guitar. He told Mojo, "The only reason I bought the Echoplex was to try and imitate Sanders' sustain on my guitar." Martyn also said that Sanders' saxophone playing influenced his vocal phrasing early on.

Hot Right Out Of The Gate
Martyn became the first white solo artist signed to Chris Blackwell's esteemed Island Records, which until then had been primarily a reggae label. His debut was London Conversation, released in 1967 to critical acclaim. It was followed a year later by The Tumbler. Both were pretty much acoustic, folk-influenced recordings, but Martyn's sound changed with 1970's Stormbringer. Martyn had married singer Beverly Kutner, and together they traveled to Woodstock, N.Y., to record with The Band's drummer, Levon Helm, and electric bassist Harvey Brooks, among others. This was the album that introduced Martyn's Echoplex sound.

But it was 1971's Bless the Weather and its follow-up, Solid Air, that took Martyn to a wide audience and made him a concert-hall attraction. Martyn was joined on both by Pentangle's Danny Thompson, an outstanding acoustic jazz bass player. Solid Air is regarded by many as Martyn's finest work. The title tune was dedicated to Martyn's friend, Nick Drake, and addressed Drake's mental instability — he died of an apparent suicide a year after the album's release. The album also included what's become perhaps Martyn's best-known song, "May You Never," which was later covered by Eric Clapton.

More than 30 albums followed, including the beautiful Sunday's Child and one of the first independently released albums by an artist of his stature, Live at Leeds. But Martyn's collaboration with Danny Thompson had a downside. They became drinking buddies.

Bad Times, Good Times
Martyn had apparently always liked to party. But he became a heavy drinker, and it affected his music. He'd show up at concerts falling-down drunk. He bounced from label to label, recording good albums and bad. His marriage to Beverly fell apart, and he bared his emotions in the album Grace and Danger. Chris Blackwell thought it was so raw that he delayed its release for a year. Martyn's dealings with managers became litigious. Finally, the 1990s ended and things started to look up, sort of.

In 2000, Martyn released Glasgow Walker — composed on electric keyboard instead of guitar — to almost universal acclaim. He entered rehab and cleaned up quite a bit, though not completely. He gained a lot of weight, and in 2003, a cyst burst in his right leg and it had to be amputated below the knee. Nevertheless, he continued to perform from a wheelchair.

Last year, Martyn received a Lifetime Achievement award at the BBC Radio 2 Folk Awards, where Phil Collins and John Paul Jones sang his praises. And earlier this month, John Martyn (he was born Iain McGeachy) was named an Officer of the Order of the British Empire by Queen Elizabeth II for his contributions to music.

According to a December 2008 article in the English paper The Sun, Martyn had almost finished a new album and was scheduled to record with his inspiration, Pharoah Sanders. Fans can only imagine what that might have sounded like, and shed a tear at the passing of a truly original voice.

| Paul Hillery
@bigmuffsite found this but didn't see it on your concert list https://t.co/NurVAf1AVs
10 months 3 weeks ago
END_OF_DOCUMENT_TOKEN_TO_BE_REPLACED