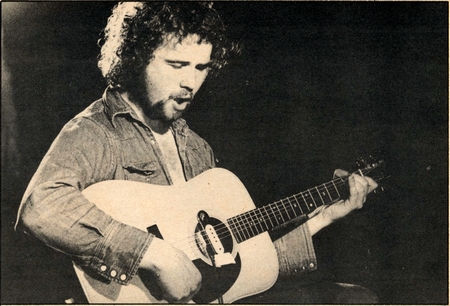 1967: "So there I was on this barge on the river wearing nothing but denims and a smile..." so runs the sleeve note on London Conversation, the first 'white' album on a thriving reggae label by an eighteen year old folk guitarist and singer.
The barge was a folk club moored on the Thames at Kingston, dim and candlelit, full of budding Davy Grahams and Bert Janschs. John Renbourn used to play there. That's where a 'big fat greasy hustler' saw John Martyn and took him to Chris Blackwell of Island records. The result was a pleasant album four-square within the current folk trends, with the familiar melodic cadences in the singing and phrases like "you've been drinking all your years like wine" dotted among the lyrics.

1973: John Martyn in concert with Danny Thompson, amplified string bass. The guitar is amplified and two foot pedals operate a fuzz box and echoplex. Waves of sound, in chords and phrases wash over the audience. The voice too has been transformed from the precise tones of the folk revival to a playful, muttering, moaning and screaming instrument deployed against Thompson's busy bass lines and the dense guitar sound.

FROM AN apprentice folkie to a stylist who combines so many ideas and influences in such a unique way that he escapes all the critical pigeon-holes (and that's the proper definition of the avant-garde artist), John Martyn has revolutionised his music in six years. His records show it, but it didn't feel as apocalyptic as that: "it's like your teeth rotting or hair growing - it starts imperceptibly and keeps on going."

One thing that's clear is that John Martyn never had any purist conception of folk music, no intention of remaining true to a school. The second album (The Tumbler, 1968) did, it's true, stick to the folk repertoire, but Harold McNair was brought in to add flute accompaniment and duet with John's voice on a couple of numbers. And this policy continued on the two records John Martyn cut with his wife Beverley, herself an accomplished writer and singer.

Stormbringer (1969) and The Road To Ruin (1970) constitute the second stage of Martyn's career. The album titles themselves suggest the move away from the predominantly whimsical emotional atmosphere of the first two albums. Not that they are sombre records but the folk jolliness and tumbling wordplay gives way to a serenity of words and music. A lot of the new impetus came from Beverley's quiet and subtle singing style, in the manner of Grace Slick in the more restrained moments of the early part of her career, and of Judy Dyble, the Fairport Convention's first lady vocalist. It's a manner which has been lost since Dyble dropped out of sight and Beverley Martyn gave up her career with the birth of her first child, though she may cut a solo album next year.

Stormbringer made John and Beverley minor cult figures in the States -it's occasionally still referred to lovingly in the more Anglophile rock magazines- but it was ignored here. The Martyn's unobtrusive innovations didn't fit easily into the folk-rock bag, and they were never part of the "progressive" folk set who seemed endlessly to be forming and re-forming bands from amongst their number.

Road To Ruin was remarkable for two important innovations: it was the first album in which songs from a folk context were performed with jazz rather than rock instrumentation, and on it John Martyn's voice finally broke free of its folk roots, again via jazz rather than rock influences. Both, of course, were things Donovan had pioneered, but, unlike John Martyn, he never allowed them to permeate his whole style and take it forward.

The dominant instrument on Road To Ruin is the lazily stroked piano of Paul Harris, backed up by a loose but firm rhythm section and thoughtful blowing from the likes of Ray Warleigh, Lyn Dobson and Dudu Pukwana. The breakthrough track is the title song:

The voice slides around the mysterious words huskily and then gives way to a sustained saxophone passage in which Pukwana duets with himself, while John Martyn's own amplified guitar gradually comes to the fore.

Although Martyn, together with Paul Harris, was responsible for the arrangements on Road To Ruin, a significant part of the album's success depends on the quality of work of the musicians he had gathered around him. The next stage for John Martyn was to return to more or less solo work, and to integrate into his own singing, playing and writing lessons learned from jazz and other musicians he had played with or listened to.

Currently, he's picking up most on the music of Pharoah Sanders, Joe Zawinul and Alice Coltrane and also Indian music. No guitarists there, which is almost deliberate since John's attitude is that to learn from other guitarists means playing like them, whereas if you take musical and harmonic ideas from players of different instruments, the very act of translation to guitar terms sets off a whole chain of new ideas.

So the last three years and the last three albums have been spent in the steady development of a very individual approach to music making. The John Martyn voice has become even more of an instrument, to the extent that on many songs what matters now is not so much what the words are as what the voice does with them. It's an exact equivalent to an instrumentalist extemporising on the set of changes that underlie the melodic theme of a tune. In performance this approach can produce extraordinary and unexpected results, like the transformation John can bring to Singing In The Rain when, with a lascivious growl, he sings that line "I'm ready for love". It gives a whole new perspective on what Gene Kelly was on about in the film!

Although John Martyn has been absorbing ideas from a wide range of sources, he has made them all his own. His style has become more compact rather than spreading out into a formless eclecticism. That he has done so is due less to his 'philosophy', which is quoted at length in any interview with him, than to something less tangible: force of character, voracious musical energy, whatever it is, anyone who's been to a Martyn concert will recognise it from the way he introduces his songs and the winks, smiles and grimaces with which he 'talks' to the audience during the long intense guitar passages.

Each of the last three albums has possessed, in its own way, an elemental force. Bless The Weather, which took on the river imagery of Road To Ruin, had the fludity of water, while Solid Air lived up to its enigmatic title by retaining that lightness of touch in the context of stronger rhythms. Inside Out, the current record, is more fiery than either, with a battery of rhythm instruments backing up some intense, though never frenzied, guitar playing.

If John Martyn has a fault at the moment, it's a tendency in live performance to overelaborate some of the more abstract pieces. But this is only a minor quibble. At a time when the tag 'progressive' is hung around the necks of many people whose music would have been more at home in the Dark Ages, Martyn is one of the few genuinely progressive musicians Britain has.

sitenotes:
This story was published in Let It Rock of December 1973, on page 39.
Let It Rock (editor John Pidgeon) was a quality monthly magazine published in London by Hanover Books ltd. The original issue had Elvis on the cover and cost 20p.

| Elliott Franks
John Martyn live at The Anvil in Basingstoke on the 27th April 2004 mad to think this was 16 years ago… https://t.co/fmbKEx3uCY
1 month 1 week ago
END_OF_DOCUMENT_TOKEN_TO_BE_REPLACED