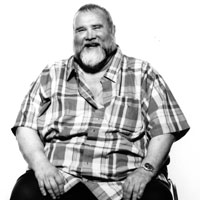 HERE'S THE LAST TIME I saw John Martyn, trundling onstage at last year's MOJO Honours List ceremony in his wheelchair, waving and smiling like the Queen mum in her landau, one leg short since 2004, when a burst cyst poisoned it, forcing amputation.

He was there to collect the MOJO/ Gibson Les Paul Award for marvellousness on the guitar, but he had a claim on a good half of the other gongs. Hero, Legend, Inspiration, Maverick, Classic Songwriter – he was all of these and more. But what would this troubled, unpredictable but always funny man have to say to the throng of admirers?

"I promised my manager I wouldn't get legless."

The place cracked up, and any pity or tension in the room dissolved. Martyn was one of British music's pioneers, a genuine soul man who recognised no generic boundaries, a pioneer of guitar effects (The Verve's Nick McCabe was one in a long line of adherents) who struck contemporaries from all walks of music with his effortless musicality and reckless pursuit of good times.

"Great fun to work with, John Martyn," Lee "Scratch" Perry once told MOJO. "He's willing to hear, willing to listen, try anything... And he love to drink rum…"

Born in Surrey in 1948, the child of Glaswegian light opera singers who divorced when he was 5, Martyn was inspired to play the guitar by master-folkie Davy Graham, and appeared to imbibe the latter's bohemian inclinations along with restless eclecticism. When Martyn moved beyond straightahead folk – leaving the excellent London Conversation (1967) album in his wake – and reached towards the soft-focus mumble-rock of Solid Air (1973) and the global genre-jamming of One World (1977), he was building on Graham's legacy but transcending it.

His private life was always chaotic. His marriage to folk singer Beverley was also a creative partnership that resulted in the Stormbringer! and The Road To Ruin albums (both 1970), but his label Island insisted he go solo ("they said she sang flat," he would angrily recall), and recent interviews suggest she never quite forgave him. Meanwhile, he played the lothario, and he was shot at least twice, once in a Boston bar with a .38 slug, once with a shotgun in the back, both times in pursuit of women.

Martyn liked to give the impression of bon vivant who regretted nothing. But there was often a sadness in the twinkling eyes, and something schizo about the range of personae he was able to summon in conversation, from English posho to Scots brawler. It's hard to be convinced that someone so seemingly bent on alcohol-fuelled destruction wasn't running away from something.

Martyn's booze-based misadventures were always recalled with relish – famously, he once awoke after a bender with bibulous bassist Danny Thompson to find that he'd been nailed under a rug – but he admitted to having been "out of control" around the time of his Grace And Danger album (1980), and the ballooning weight that came with his wheelchair confinement in the oughties, along with the continued abuse of alcohol, caused him almost constant health problems in recent years.

But it shouldn't distract us from the soulful and brilliant music he left behind, best encapsulated, perhaps, in the track Solid Air. A poignant meditation on the decline of his friend Nick Drake, it is also a brilliantly conceived soundworld, a knitting of skeins of nothing into one sublime something.

John Martyn will be missed. And so will his art.

This story was published on the Mojo music blog, www.mojo4music.com

| Paul Hillery
@bigmuffsite found this but didn't see it on your concert list https://t.co/NurVAf1AVs
10 months 2 weeks ago
END_OF_DOCUMENT_TOKEN_TO_BE_REPLACED