The Day John Martyn Played For Us In Prison

In 'Paranoia City', the hellhole that was our home, Martyn's heartfelt concert made us feel human again.

The news of John Martyn's passing took me back to a packed gymnasium in what, at the time, was one of the most dangerous high security prisons in the country. HMP Long Lartin, a festering wound of a jail nestled in the heart of the beautiful Vale of Evesham, Worcs, held men serving some of the longest sentences in the system. 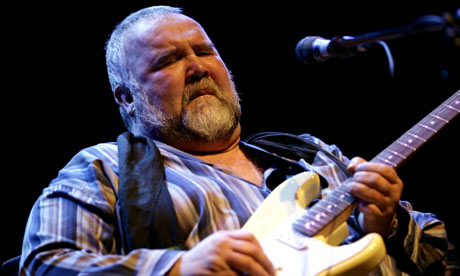 Small cells located along narrow, dimly lit corridors or "spurs," created a claustrophobic atmosphere that helped to drive us all a little more crazy. Keeping a lid on the tension was a struggle. Every other night the sound of at least one "smash up", the term for when a prisoner goes berserk in his cell and smashes to pieces everything in it, would echo through the wings, followed by chants of encouragement from the neighbours, "Go on son, give it some!" Sympathy or understanding from brother cons was scarce. Any expressions of the gentler emotions were read as signs of weakness.

It was a robust environment, hostile and bleak where atavism thrived and crybabies got crushed. The adopted name of one of my neighbours really was Crusher – a man who had spent years stabbing and bashing his way to the upper echelons of the prisoner hierarchy. The Crush, as we called him affectionately, had begun his prison journey with a relatively paltry three years for burglary and by all accounts had been a fairly normal convict until the day he took offence to a ribbing about his real first name, Mervyn. He smashed his antagonist's skull several times against a recess sink and ended up with a seven-year stretch for wounding with intent and a ticket to our hellish enclave, "Paranoia City".

Just a week before John Martyn was due to come in to the jail to perform, one man had attacked another with a pan of boiling oil, almost killing him with shock. It had been a while since the last prisoner-on-prisoner killing and the governor was nervous. The oil incident put Martyn's visit in jeopardy. Deputations from a number of heavy-duty characters, far from retired gangsters, on B Wing and E Wing persuaded the authorities that it would be good for morale in the prison for the concert to go ahead – and so it did. And what a concert.

Martyn's entourage had attempted to smuggle in a couple of gallons of hard booze, but it had been confiscated by prison officers. It didn't stop Martyn and his band giving a performance of a lifetime – at least that's how it seemed to us. He was at the end of a 48-date tour and had agreed to a request from someone in the jail who had connections to the music business to make the gym in Long Lartin his 49th. With few signs of fatigue Martyn took to the makeshift stage and endeared himself immediately with a roar of "Hello brothers!" We roared and cheered and whistled back. He took swigs from a family sized mineral water bottle and staggered slightly. "Come on!" he shouted to his band and hit the strings of his electric guitar.

He played Solid Air, his voice rising and falling, mesmerising us – all sitting noisy but attentive, enhancing the experience with our own smuggled in bottles of hooch, spliffs and a multitude of pills, mostly supplied by the Bear and his Indonesian associate, Fat Cat.

John Martyn was on top form – he seemed to go into his own dream world as he played through his set, many of the songs the majority of us were hearing for the first time. And then something magical happened. He put down his Strat and called for an acoustic six string. The band slunk back to the shadows. "Some of you may know this song," he said. Then taking a deep breath he steadied his voice and sang, "May you never lay your head down without a hand to hold, May you never make your bed out in the cold…" His signature song, the classic made famous by Eric Clapton's Slowhand cover, but most truthful when sung by Martyn himself. Until that moment we had been a rowdy bunch, revelling in our entertainer's onstage revelry, relaxing in the ambience of the music, chilling, dreaming. But suddenly Martyn was singing directly to each and every one of us: "Well you're just like a great strong brother of mine and you know that I love you true/You never talk dirty behind my back and I know there are those that do/ Won't you please, won't you please, won't you bear in mind, love is a lesson to learn in our time/Won't you please won't please won't you bear in mind for me … "

Those lines meant so much to us, among us the down, the defeated, the betrayed and the betrayers – an anthem for relationships, a hymn to friendship and love. "And you're just like a good close sister to me and you know that I love you true/You hold no blade to stab me in the back and I know that some do…" The words could not have been written for a more needy audience. As he sang, the depth of our exposure was near tangible. Even Crusher looked like he was going to cry. When he finished we stomped, yelled, whistled and cried for more. But with lock-up upon us there was no time for encores. Martyn bade us farewell with a giant, rasping, "Keep on rockin' brothers!" And then we filed calmly out of the gym and back to our cells, feeling for a while like members of the human race once more.

The next day the gym cleaner found Martyn's big mineral water bottle. It stank of vodka – that made us howl. No wonder he was on such good form. Thank you John. Wherever you are now, I hope you have a hand to hold.