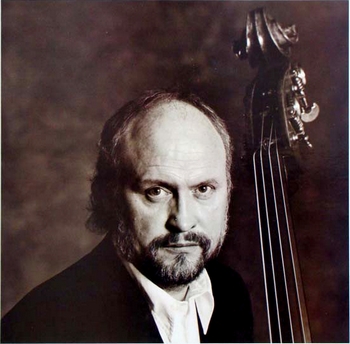 John Martyn and Danny Thompson are performing their celebrated duo in a packed City Hall in Glasgow1. Mid-way into the set, Thompson disappears from the stage, only to re-appear moments later on the balcony, remonstrating with a persistent idiotic heckler. Martyn glances up, gives an 'it's just Danny' kind of shrug, and carries on playing as if nothing was happening.

"Were you there!" the bass man laughs. "Yeah, well, the guy was being rude and annoying to everyone, and he had to be ejected. If it was in my house, I'd chuck him out, and the same thing applied. A lot of people paid good money to hear the music, and we wanted to play, and that geezer shouldn't have been there. Nothing to do with drinking, really, that's just me!"

That was back in the Seventies, when Thompson was known to sink more than the odd pint, but he has put that aspect of his life firmly behind him.
"Yeah, well, I don't need to suck on a bottle any more – l don't drink and I don't smoke and I don't take drugs, but a lot of people have blown it during those years, and I feel very honoured to be getting another crack at my age, when most people are starting to think about bus passes and stuff."

That other crack comes in the form of Danny Thompson's Whatever, the first group the fifty year old bass player has led under his own name since the mid-Sixties. In between times, he established a fulsome reputation as an exceptionally lyrical performer on his instrument, most notably with Pentangle and in that association with Martyn, but he is out to establish a similar profile for his own highly melodic group this time around.

The trio who played on the band's first album, Whatever, have been expanded to a quartet for the new record, Whatever Next. Saxophonist Paul Dunmall joins Danny, guitarist Bernie Holland, and reeds and pipes player Tony Roberts (Thompson likes the extra space created by the absence of drums) on what is a more open blowing session than their acclaimed debut.

Paul has also become a member of the touring group, something the leader feels is very important.
"l'm a strong believer in the old-fashioned idea that what you record you should be able to reproduce on gigs. It's fine getting good budgets to make clever albums, but I think if you pay a fiver to see someone, you should at least expect to hear the thing which maybe lured you in the first place."

Whatever reflects Thompson's abiding love for English music, a field which he feels is under-developed in comparison with the kind of advances which have been made, for example, in Celtic music.

"The neglect of our music is typical of the English — there are no statues to Elgar or Delius. Politically, l'm against nationalism of any kind, because it leads to too many punch-ups and people getting killed, but in musical terms I think there are particular melodies and harmonies that are very English, and l don't think they have been properly exploited. Things like Basket Of Eggs or Hop Dance on the new record reﬂect that music, and that is the music I grew up with. Music doesn't come from academics, it comes from peasants, from ordinary people."

Typically, the folk elements come intermixed with a more jazz-based inﬂuence, and a touch of rock; no respecter of categories, eclecticism has always been part of Danny's refreshing style.
(Kenny Mathieson)

Danny Thompson's Whatever play the Queen's Hall, Edinburgh, on 24 March (see listings). The band return for four nights at the Tron, Glasgow, in May.

"Sadly I have to refute the rumours that I don't smoke dope."

| Elliott Franks
John Martyn live at The Anvil in Basingstoke on the 27th April 2004 mad to think this was 16 years ago… https://t.co/fmbKEx3uCY
2 days 9 hours ago