Bless the weather that brings us John Martyn

JOHN MARTYN is one of the great originals from the British folk-rock scene and now he's returning to the west to play Campbell's Tavern, Cloughanover, Headford, on Saturday 10, as well as the TF Royal, Castlebar, the day before. 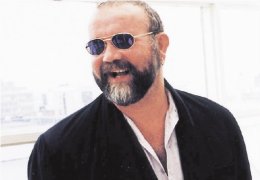 Since emerging from the Scottish folk club scene in the 1960s, Martyn has remained one of the most distinctive folk/singer-songwriters of the last 40 years, always exploring new musical territories, and pushing boundaries.

Martyn first came to notice with the release of London Conversation in 1968. A delicate, acoustic album of memory and imagination, it showed the artist had the potential to develop into someone unique.

Influenced by the saxophone playing of both John Coltrane and Pharoah Sanders, he sought to capture their style and mix it with his own fingerpicking to create his unique guitar style. This and the accompanying influence of jazz really made its presence felt on 1971's Bless The Weather, a more soulful, atmospheric record.

However it was in 1973 that he recorded the album he is best known for and that many consider a true rock classic: Solid Air. While it contains the immortal radio favourite May You Never and Martyn's tribute to Nick Drake (the title-track), it is the combination of laid back jazz, Isaac Hayes style funk, and haunted folk-rock in songs like Go Down Easy, Don't Want To Know, and Dreams By The Sea that have led many to admit (albeit privately) that Solid Air is everything Astral Weeks should have been.

Continuing to push himself forward Martyn released such other well-received works as Sunday's Child and One World, while 1980's Grace And Danger (produced by Phil Collins) saw him enter the new decade in fine form. However artistically and personally the rest of the decade proved quite rough. He was back on track by the 1990s and in 1998 he recorded an album of his favourite songs, The Church With One Bell in reference to a disused kirk in the Scottish village where he lives.

In 2001 he released the acclaimed Glasgow Walker. It was self-produced at his own studio in Scotland and mixed in Kilkenny where his girlfriend lives. Now he's released a new album On The Cobbles, which features songs of heartfelt warmth sung with ripe honesty including a duet with the English singer-songwriter Kathryn Williams.

"I've accomplished my ambitions," Martyn said recently about his career. "I haven't made loads of money but I've led a very comfortable life, I've had lots of fun and met some beautiful people. I think your spiritual status is far more important than the status of your career."

However he still feels he has plenty to give and anyone who has seen him live will know that for a fact. Those yet to experience the pleasure have no excuse on Friday and Saturday. For more information contact Campbell's' on 093-35454 or email www.campbellstavern.com. Those who would like to see Martyn in The TF Royal, Old Westport Road, Castlebar, should call 094-9023111 or email www.tfroyalhotel.com.

One week later an extra show was squeezed in:

Scottish folk-soul singer John Martyn will play an extra gig in Campbell's Tavern, Cloughanover, Headford, on Sunday afternoon in addition to his Saturday night show. John Martyn will treat his Galway fans to an extra gig on Sunday at 3pm, as well as the Saturday night show. Martin is one of the most innovative voices in British folk and his spellbinding combination of folk, soul, jazz, and pop has resulted in such classic albums as Bless The Weather (1971) and Solid Air (1973). For tickets for Martyn's Sunday afternoon show as well as Saturday's gig contact Campbell's on 093 35454 or email www.campbellstavern.com.

| Paul Hillery
@bigmuffsite found this but didn't see it on your concert list https://t.co/NurVAf1AVs
6 months 3 weeks ago
END_OF_DOCUMENT_TOKEN_TO_BE_REPLACED