Chris Glen is a bass player mainly known for his work with the Sensational Alex Harvey Band and the Michael Schenker Group. In 2017 he published his memories in a 192 page paperback, with the help of Martin Kielty. On page 64 Big John enters the proceedings. 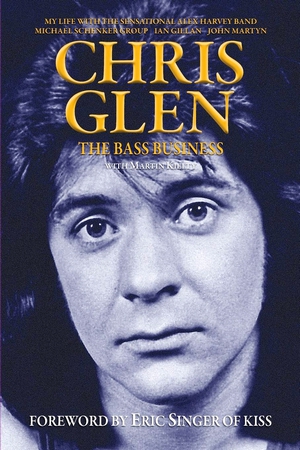 In 1978 I got a call from a drummer called Timi Donald,1 who'd been in the Pathfinders in Glasgow. He told me, 'John Martyn is looking for you. I'm playing with him – would you mind coming in? He's doing production work for Grace & Danger.' I was getting £100 a day for production, which at that time was fantastic.

Chris Blackwell, the Island Records boss, wanted me to play on the album, but I had to say, 'You'll need to get in touch with my management,' because they still had me under that contract. The management went, 'We want this, we want that, or we can't do it.' So John's people went, 'Let's forget it.' So John Giblin did it. If it wasn't for the management I'd have done much more with John Martyn. As it was I only got to do the stuff that was cash, like the production.

I did get to play with him live though, including a show on the Pyramid Stage at Glastonbury.2 The thing about John was, I had to concentrate like fuck instead of enjoying the moment. He even did a Tear Gas song in Glasgow, like, 'Okay, Chris, we'll do one of yours.' I totally fucked it up – his tuning was like fucking Martian. Normally you'd go, 'Oh, he's playing something different, so I'll watch his hands and pick up the chords.' John was playing what looked like a G but it was probably a B-minor diminished. On top of that, he would ad lib. That's great if you're his drummer, but as the bassist, I'm watching him and going, 'I haven't got a hint! I know what I was playing back there, but is this a fifth or a third? It's a weird conglomeration!'

But as soon as you hear John's voice it's all over. It's brilliant. I loved him to death, but he could be a nightmare. One night we went into a pub in Notting Hill and he stopped at the door and said, 'Let me check.' He pulled out a flick-knife, put it away, and told me, 'It's quite heavy pub.' I was like, 'Why are we going there then? Other pubs sell the same beer.' He said, 'It's a good atmosphere!'
(Eric Clapton used to cover John's songs.3 He was on the same management as Ralph McTell. I went out for a night in Germany with Ralph when I was with SAHB. We got so pissed. I had a gig the next day and I made it, but Ralph had to miss his next two gigs and he's never forgiven me.)

A wonderful thing happened a few years after John died. I was in a Chinese takeaway in Knightswood, reading their copy of the Sunday Times. It had an interview with Michael Eavis, the boss of Glastonbury,4 and they were asking, 'You've had the Stones, The Who, and everyone. You must be fed up with this question, but what's the best band you ever say at Glastonbury?' He said, without question, when John Martyn headlined the Pyramid Stage with a three-piece in 1979, that was it. His quote was that the show 'brought tears to my eyes.' That was me, Timi and John. That was brilliant. I just wish I could have enjoyed it more at the time! I've done lots of things wrong, but it's nice to know when you've done something right.

sitenotes:
1 In the book the name is spelled Timmy but Timi seems to be the most official version.
2 This refers to the June 1979 edition.
3 That is a bit exaggerated. Eric Clapton only covered May You Never, on Slowhand (1977).
4 This was in June 2011.

| Kerrie Brown
So proud of my parents ❤ its time for someone else to enjoy their creation. Lots of history from WW1, village marri… https://t.co/WULTU1oYXC
4 months 4 weeks ago

| Big Muff
Photographical mystery solved - except for the name of the photographer https://t.co/oSCnGikFSx
9 months 2 weeks ago

| Big Muff
Blast from the past: Guitarist interview from 1985. Ever heard of Scheme? https://t.co/Qg4tDy0zEX
9 months 3 weeks ago