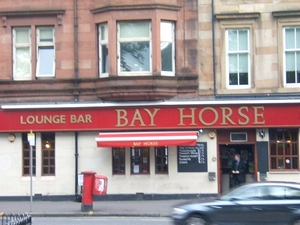 This is a transcription of a cassette tape from an interview conducted in the Bay Horse pub in Glasgow. It was used for the biography Some People Are Crazy by John Neil Munro so some quotes may sound familiar. John was interviewed several times; this occasion was after the release of On The Cobbles (April 2004) and hours before the concert in the Glasgow Carling Academy of 17 November 2004.

John is interviewed in The Bay Horse pub opposite Queens Park, 962 Pollokshaws Road.1
"This is 150 yards away from the first gig I ever played," says John. "This was 1965 or 1966 at the Langside Borough Halls,2 which is two blocks away from where I was brought up.3 I appeared as Iain David McGeachy, for the first and only time. Played Fairy Tale Lullaby – think that's the only thing I had written by then." 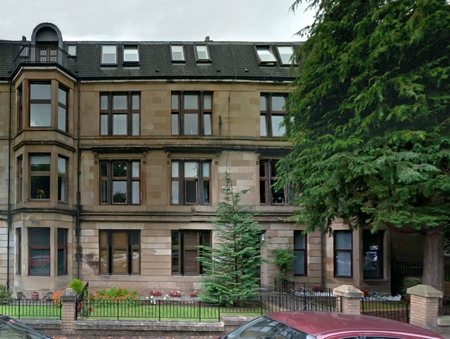 Were you top of the bill?
"There was no bill! It was in aid of something or other."

When did you actually change your name to John Martyn and what was the reason for the change?
"A guy called Sandy Glennon [John's first agent, ed] saw me in London and became interested in me. He advised me to change my name. He was much older than me, he was about 60 at the time and I was 19. An awfully nice man – very gentle fellow. Thought Iain David McGeachy sounded too Scottish. In those days there was no traditional scene as such. You had to be American sounding. I was more influenced by American music than Scottish music as such. The name Martyn was his idea – but it had to have the Y in it, to sound posh, I don't know!"4

When did you write your first lyrics, were you writing words and music at Shawlands Academy?
"Yes, a lot of the stuff (on London Conversation) was written here in Glasgow. In fact everything."

You were quite a bright kid weren't you?
"So they say."

John laughs at the mention of appearing on a school quiz show on STV, saying he only got one question wrong –a question about non-ferrous metals– and saying that they won. (They actually lost.)
"I don't remember being beaten! Would be funny to see it now though."

What were your favourite subjects at school?
"English and I liked art as well. I was fairly seriously into the guy who wrote One Flew Over The Cuckoo's Nest, Ken Kesey. My father gave it to me when I was 15 for some reason – he was a very straight man my father. I liked Naked Lunch [William S. Burroughs] too, all the junkies, and Alexander Trocchi.5 It was hip to be a beatnik then, not a hippie. My father allowed me everything, he was very cool. When I had my first smoke of ganja he said 'What's that son?' and I said 'That's hash daddy,' he told me to heat it up properly!"

I read somewhere that your granny gave you your first taste of whisky, but when and where was that and why did you first get drunk?
"I was nine and it was at number 2 Hampton Court Way [East Molesay, ed] in high summer, the middle of August. My uncle Ray, who loved me like a son gave me two glasses of Bulmer cider. It set me on my arse. I'll never forget it – I was doing somersaults and I ended up falling down the stairs. Used to drink all the time at weekends when I was at secondary school."

When did you get your first guitar? What make was it and how easy did you find it to learn to play. How many hours a day would you practice – who were you listening to for influences?
"My first guitar was borrowed from a guy called Johnny Briggs in Glasgow, he lent it to me. It was a right dodgy guitar, he played for The Paisley Pirates ice hockey team. He was older than us, all us kinds wanted to be like this Johnny Briggs. I started to like the music and I actually begged my father for a guitar. Still have the first guitar I bought –it was a Rolif acoustic– made in Bulgaria. And a very fine guitar it is too. I was in love with the thing, I used to run home from school to practice. We stayed at number 10 Tantallon Road [Glasgow, Shawlands ed.], in the top flat."
"The first time I ever heard finger-picking guitar was Joan Baez doing Silver Dagger. I'd never heard that sound before. I loved that sound and then a friend of mine called David Macfarlane, whose father was a conscientious objector which was a terrible thing in those days, introduced me to all the protest music. His family were all lefties, I first heard Bob Dylan there. And then I heard Davy Graham and that was me gone. I loved Angie –that was the test piece– if you could play Angie you were taken kind of seriously, you had the basics. Davy Graham is a genius and such a nice guy, without him there wouldn't be Bert Jansch, [John] Renbourn or me."

Were there any concerts you remember attending during the Glasgow days which inspired you. I know a lot of folkies from that era talk of seeing Brownie McGhee when he toured in the early 1960's.
"I do remember that Sonny [Terry] and Brownie wouldn't speak to each other on stage and they had separate dressing rooms! Hamish Imlach used to be a promoter - there used to be people selling pound deals of hash at the door but it was actually henna, chalk and black boot polish! You had to import people like Tom Paxton and The Reverend Gary Davis – they would do like a gig here and maybe one in Kirkcaldy and then fly back."

Regarding Hamish Imlach, where did he give you guitar lessons – was it at Andrew Moyes' Glasgow Folksong Club? I read that he charged £1.50 a time – was that the same for you?
"I never took lessons from anybody! I used to watch the hands but I never took lessons as such. But Hamish was very kind to me – he was my guide and mentor. A friend of my fathers –they were in the same lodge together, Pollokshaws or whatever– called Billy Synott. He thought I was good and took me to Hamish. I used to go to Hamish's house on Sundays for spaghetti bolognese, which was like a ritual thing. They kind of adopted me really. Hamish was an incredibly generous man, wild in spirit but just totally socialist with a wonderful sense of humour. I miss him terribly. You should speak to his son James. The Imlachs will tell you about when I was young, they remember more than me."

Were your parents supportive of your career? How did they feel about you jacking in Cambridge to play professionally?
[Laughs:] "They were rather jealous of me! The idea of being recorded – that was a big thing at the time and I managed that when I was 19, I think. It put their noses slightly out of joint. Also they didn't fully approve of my repertoire, they were really into variety. She was Betty Benson and he was Russell Paterson, Scotland's Troubadour."

John denies being at Cambridge; says he would never have gone there if you paid him. [Laughs again:] "I deny it all." He'd rather have Cambridge not being mentioned at all to be honest. "I'm associated with Cambridge because of Paul Wheeler and Nick Drake, who was a great friend of mine. I would have liked to have been a doctor, though."

When did you take your first smoke of hash?
"Probably when I was about 16 and a half. From a guy on the Glasgow folk scene called Les Brown. He had a lovely voice – intuitive grasp of Appalachian music."

Generally Solid Air is considered being your best album…
"Nah. Generally I still like Inside Out best. I didn't want to be stuck into being straight. Also Grace And Danger, though I would do that different now, back then I was too busy being sad. Chris Blackwell thought it was too miserable to release, which is very true. It's all about Beverley. If you speak to her you'll have to expect a whole dose of vitriol. She's a dear old lady now, she'll say I was a terrible handful. Lovely girl, bless her – she didn't deserve me. I came from the bottom of the pack. She's too sensitive for her own good." "We weren't getting enough money. I was only getting £100 a night and once you pay expenses of that, you're left with £30. And we had a house the size of your manager's ambition! But it was good fun though."

Were you in the school rugby team?
"Yes I was – I used to play fly half or flanker, liked the position at the end of the scrum where you could nail the opposing scrum half, that was my favourite position. I used to torment scrum halves. I'm not so much into football though I used to see Third Lanark. I was a good all-round cricketer too – I was best in the field, a good catcher in the slips. I used to play in the Clydesdale cricket team –very relaxing– and all the village teams in England."

John concludes the interview with the remark that he doesn't like On The Cobbles; he thinks it was over-produced.

sitenotes:
1 The Bay Horse pub was closed, renovated and opened 2012 under new ownership and renamed Sweeney's on the Park.
2 Langside Hall is situated in the west corner of Queens Park, Pollokshaws Road-Langside Avenue.
3 John is referring to 10 Tantallon Road.
4 This story is confirmed by Jim Tullio but he heard a slightly different version earlier. "[John] told me, his first agent [Glennon] told him he should change 'Iain David McGeachy'. So on the spot he looked around the room and saw a Martin guitar. He always loved Martin's so he claimed the name and decided to spell it with a y instead of an i. The first name 'John' just came from nowhere, it seemed plain and simple enough. There you have it."
5 Glasgow born novelist (1925-1984) from Scottish mother and Italian father. Trocchi was a known heroin addict. 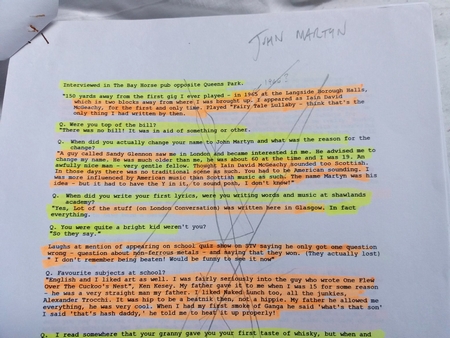 | Paul Hillery
@bigmuffsite found this but didn't see it on your concert list https://t.co/NurVAf1AVs
6 months 3 weeks ago
END_OF_DOCUMENT_TOKEN_TO_BE_REPLACED