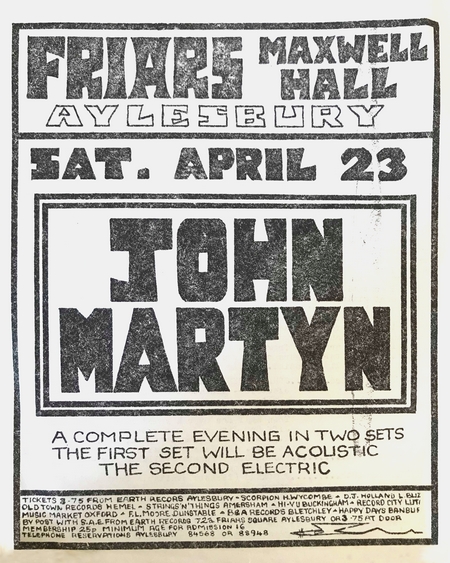 The back side of the flyer is loaded with typewriter text containing some Friars memories:

More Sweat From The Hot Guitar

John Martyn first burst upon the British music scene in February 1968 with his first album for Island records London Conversation which was quickly followed in December 1968 with the release of his second highly acclaimed album The Tumbler. By the time Friars started up in June 1969 Martyn was already a force to be reckoned with and was probably too big to play our little Friars venue in Walton Street. In the end it took over 12 years to finally get John Martyn to Friars but the wait proved more than worth while as anyone who came to his superb Friars debut in October 1981 will testify. The only criticism of that concert came from some of the people who were particularly into his early material which was mostly acoustic. John Martyn on an acoustic guitar has to be seen to be believed. This time round, however, everyone should be happy as the first set will be entirely acoustic followed by a second completely electric set similar to that devastating set he produced in 1981.

Ever since John Martyn went to Jamaica in 1975 to work with Lee Perry and Burning Spear his musical direction has been heavily influenced by reggae, soul and funk. By 1977 he had released the classic One World album which first showed what he could do with the electric possibilities of the guitar (using an Echoplex Unit).1 This was the time that John started working with Friars hero Phil Collins2 who had a major influence on his music at the time. Phil appeared on John's 19812 album Grace & Danger and worked extensively with John on live dates. This partnership was further strengthened on the next album Glorious Fool which was entirely produced by Phil as well as having Phil on drums.

In 1982 John Martyn produced his 12th album Well Kept Secret which received ecstatic3 reviews and went straight into the British top twenty album chart giving him his best ever chart placing. Last September John embarked on his biggest ever tour of Britain and has in recent months been touring in Australia, New Zealand and Europe. In terms of sheer energy and feeling we have never seen anyone put so much into their live performance as John Martyn did back in October 1981. When he came off stage he was literally drenched from head to foot in sweat. If you've ever been interested in guitar players or if you just like good music, this April 23rd date is pretty well essential. Highly recommended.

Poll results should be out for John Martyn date. Marillion's Market Square Heroes is back in the singles chart this week at 76.FD (Hermetically sealed)

sitenotes:
The image was digitally restored. Material kindly provided by Richard Hannan.
1 Not quite. John first used echoplex very modestly on Road To Ruin and no-one can be mistaken about Glistening Glyndebourne. That was 1971.
2 Not quite. Phil first appeared on the Grace & Danger album and that was October 1980.
3 That must be a bit exaggerated.

| Paul Hillery
@bigmuffsite found this but didn't see it on your concert list https://t.co/NurVAf1AVs
6 months 3 weeks ago
END_OF_DOCUMENT_TOKEN_TO_BE_REPLACED