First time John performed at Friars.
The back side of the flyer is crammed with typewriter text: 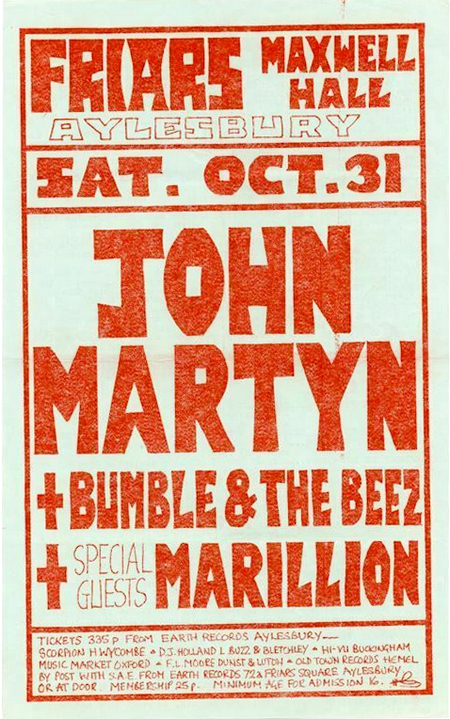 Although Friars Aylesbury is one of the longest surviving rock music clubs in Britain (it has been running more or less continuously since 1969) and must have one of the largest memberships (it currently has over 49,000 life members) there have always been a few notable rock artistes who have been going for an equally long period but who, for one reason or another, have never played Friars. Two notable cases were Slade & Gary Glitter who both finally made it to Friars in January 1981 after a decade of waiting. They both received glorious receptions. Another very significant British artiste in the same position is one of Britain's finest acoustic and electric guitarists John Martyn and now after 12 years, John will at last be appearing at Friars.

John Martyn first established himself in 1967 with his highly successful first album London Conversation. Since then he has released no less than ten more albums all of which have become landmarks in John's very varied musical career. John's second album The Tumbler was released in 1969 and featured the saxophonist [sic] Harold McNair. His third album, Stormbringer was recorded in Woodstock in 1969 and featured his wife Beverley with whom he has now separated. Back in London, John Martyn recorded Road To Ruin with bassist Danny Thompson1 and an impressive selection of woodwind players. Always one to thrive on change, John Martyn adopted a simpler attitude towards his music with his fifth album Bless The Weather. 1973 saw yet another change of direction with the Solid Air album which recalled the heyday of blues greats like Bessie Smith. Then came two more albums Inside Out and Sunday's Child before John Martyn spent time in Jamaica working with Lee 'Scratch' Perry and Jack Ruby.

By the 1977 release of One World John Martyn was exploring the electric possibilities of guitar, and exploration that continued on the 1980 album Grace & Danger following which he emerged with a new record company and a new band. It was just before Grace & Danger that John started working closely with Genesis main-man and Friars hero Phil Collins. Phil played on Grace & Danger and also made numerous live appearances with John in 1980. It was therefore a logical extension for Phil Collins to produce John's latest chart album Glorious Fool which Phil has been doing all summer. The album showcases a band which includes Max Middleton on keyboards, bassist Alan Thomson, percussionist Danny Cummings, Phil Collins on drums and vocals and John Martyn on guitars and vocals. It's still not clear as to whether Phil will be appearing on stage at Friars, but we're hoping that he'll at least be along in the audience.

Not a bad selection for a boring old ageing rock club in the sticks is it? (or is it?). Anyway, next week also features none other than the scourge of the Chiltern Seas Marillion who are continuing their rise to great heights with every week that passes. They have no less than 15 dates lined up for November which gives you some idea of the level of demand the band are creating. You should have seen them at the Marquee last week -they were devastating- it was almost like Friars visits London with half the audience having gone up specially from Aylesbury to see them. Anyway, you may remember that when Marillion made that sensational appearance in the Aston Hall on that JCC date in May,2 they decked the stage out with various grave stones etc. acquired from an auction held at the Hammer House of Horror studios at Hampden. For this special Marillion appearance on October 31st, they have suggested a FANCY DRESS COMPETITION! First and second prizes will be two of the aforementioned Marillion grave stones. Do it! BE BIZARRE! DON'T BE COOL (all the time). Life is not for being bored! (it says here) Marillion are on at 8.00 p.m. FD (It's all that the young can do for the old, to shock them and keep them up to date - GBS 1911)3

sitenotes:
1 In fact Danny only plays bass on one song, New Day.
2 On May 29th 1981 Marillion played the Aston Hall, a small hall just off the bar of Aylesbury’s Civic Centre, in support of John Cooper Clarke, during Aylesbury’s annual arts week
3 George Bernard Shaw, in Fanny's First Play.

| Paul Hillery
@bigmuffsite found this but didn't see it on your concert list https://t.co/NurVAf1AVs
6 months 3 weeks ago
END_OF_DOCUMENT_TOKEN_TO_BE_REPLACED