We were deeply saddened to learn that Scottish songwriter, guitarist, and true legend John Martyn passed away early on January 29, only weeks after being awarded Great Britain's OBE (Order of the British Empire) — not bad for a rebellious lifelong Scotsman. His website announced his death with the words: "With heavy heart and an unbearable sense of loss we must announce that John died this morning." As of this writing, the cause of that death is unknown but it hardly matters. What does is that in place of that gruff, slurring, dark, smoky voice and stunning guitar playing completely of his own design, is the silence, the gap, the void, the damn black hole in life that he filled by singing those unbearably emotional songs of his. 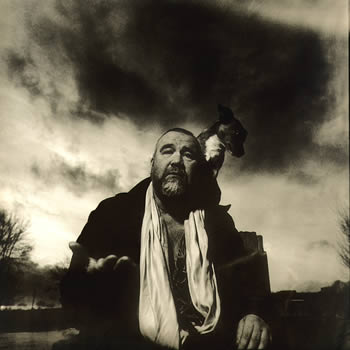 Americans know Martyn —if at all— for one track and perhaps one album: Solid Air, written for his friend, the late Nick Drake. And it’s our collective loss that we don’t know more because he was one of the TRUE giants. He may not have had the massive success he was due, but a quick survey of his fans on the other side of the Atlantic —and to be fair, a relative few here in America— usually place his name alongside those of Dylan, Morrison, and Lennon because his work was on that level. Martyn recorded more than 20 studio albums, and issued countless live dates. Some are better than others to be sure, and he was known to be erratic on stage and off. But he once said of his behavior: "If I could control myself more, I think the music would be much less interesting. I'd probably be a great deal richer but I'd have had far less fun and I'd be making really dull music."

Control wasn’t the issue with Martyn. It may have been in his life, but when it came to the music itself, he sought only the truth of the song. His method of compositions and especially of performance was one of direct transmission, from inspiration in the heart, that translated to words and music and went straight back there. His songs were always raw, hardcore autobiography and emotional honesty, and the ones he covered he performed that way. Martyn's world was the song, and he was its arbiter, its transmitter; he did everything he could to make the person disappear and have the song stand in his stead. His career was always a shambles but he didn’t give a damn about it. He’d lost a leg in 2003 due to septicemia, caused by diabetes due to his substance abuse problems, but it never slowed him down; he simply went on the road in a wheelchair and adapted. Check the video below, recorded in 2007 by Phil Cunningham as an episode in a series on art and emotion. Cunningham interviews Martyn, who also performs one of his most beautiful and moving songs, "Hurt in Your heart," from his classic Grace & Danger album.

From stripped-down blues and folk, to electronic inflected pop, chamber-influenced jazz, and acid-drenched rock without a care, he pursued only the song itself, which was the driving force in his own heart as a writer. He accomplished this with his utterly original guitar playing — just ask U2's the Edge, whose entire style is based on Martyn’s — his early use of the wah-wah pedal on an acoustic guitar, and more importantly for his employing of loop and delay technology — preceding even Brian Eno's and Robert Fripp's, as well as for his truly singular method of singing that slurred lines between notes and modalities, and at times sounded more like a saxophone than a human voice.

Big John, rest easy, and thank you for everything.

| Paul Hillery
@bigmuffsite found this but didn't see it on your concert list https://t.co/NurVAf1AVs
10 months 2 weeks ago
END_OF_DOCUMENT_TOKEN_TO_BE_REPLACED