The tribute concert of Saturday 10 September is SOLD OUT. All 450 tickets have been sold last Wednesday so Carrolls Bar are looking at a packed venue and a capacity crowd. If you don't have tickets there is no use coming to Thomastown because no more people are allowed in. A great result for the John Martyn Trust Fund and a great evening coming up!

Michael Eavis is famous for having founded the Glastonbury festival. He is 75 years of age now but still active in organising the event. When asked about his memories he comes up with a surprising favourite act. We quote from the website This Is Somerset:

Virtually every major rock act has played Worthy Farm, apart from the Rolling Stones, and Mr Eavis is confident of booking them one day. But few would guess his personal favourite was the late John Martyn, the singer-songwriter who played in 1979.
"He was so good, it brought tears to my eyes. The world would not think that was the major thing at the festival, but to me it was. Then there were The Smiths, Oasis and Radiohead. And T-Rex, who replaced The Kinks at the first festival, was one of the best ever."

Good to read this and thanx to John Neil Munro who discovered it. Read the whole story here.

So we know that 15 August the tribute album is going to be released. We also know that it is going to be a double CD and that the title is Johnny Boy Would Love This. Twenty-five artists have joined in the effort. The people behind the release have made a track available for free download: Don't Want To Know, by Swell Season. More info on this page including four sample tracks. Here's how it goes.

Before the official release, the publishers will use your email address to send you an opportunity to preorder the double CD set... And maybe a little extra. In the meantime enjoy the music.

By the way the Phil Collins track, Tearing and Breaking, might fire a memory. Indeed a track by this name featured as opening for his 2CD sampler Love Songs: A Compilation... Old And New (2004). However the version included in the tribute CD has been re-recorded at Phil Collins' own request. He and John wrote the song together. 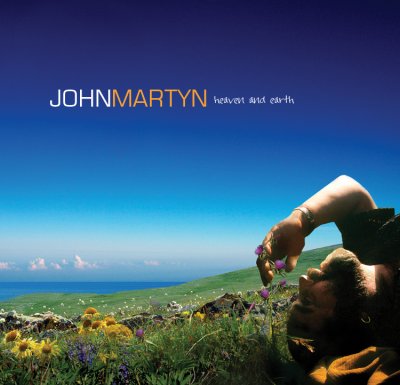 This is the artwork for John's final album Heaven And Earth. The release date has been set on the 16th of May, although there have been mentions of 3rd of May, which is not quite correct. Itunes Canada started selling the album on 4th of May, though. And Martin Chilton from the Daily Telegraph has published the first elementary review on the 5th of May. Uncut's Graeme Thomson rated the album 3 stars in a one page review.

Amazon has clips available of all songs of the album.

Two whole tracks can be listened to over here: Heaven And Earth, and Can't Turn Back The Years, featuring Phil Collins on backing vocals.

Today the following message was posted in Chicago.

John Martyn Tribute Set for July 12; Beck, Snow Patrol Among 30 On Board

An expansive 30-song tribute album to John Martyn, the pioneering and mind-bending British folkie who passed away lin 2009, has been confirmed for a July 12 street. In the works for a few years, the project -- officially titled Johnny Boy Would Love this….a Tribute to John Martyn -- includes a number of notable participants including Beck, David Gray, Snow Patrol, Lisa Hannigan, Davandra Banhart, Robert Smith of the Cure, Phil Collins, Paolo Nutini and The Swell Season. A companion DVD including recording and interview footage is also being produced for the project. See the album's full track listing below. DC will have a full write up on the Tribute w/ music streams soon.

Thanks to Twitter we can add some new info about the tribute album. Judie Tzuke has recorded a track called Hurt In Your Heart. Somehow this sounds like a good idea. The producer told her that release is expected to take place early July. But this is unconfirmed info and usually this sort of deadlines is not met.

| Big Muff
@pggriff I noticed also translucent green and blue pressings are in circulation. The waiting is for a picture disk :o)
1 week 4 days ago